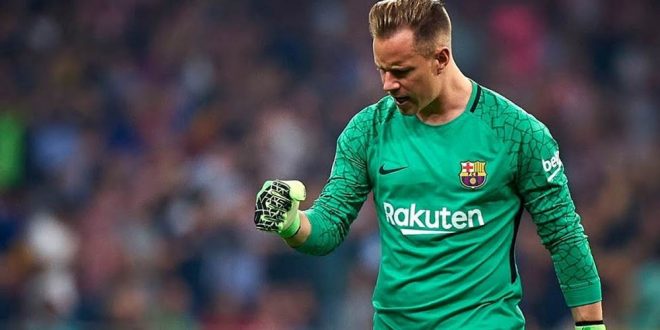 The name of the German veteran, Mark Ter Stegen, was among the list of possible departures in case he received a suitable offer. Certainly no one likes to read such words about himself in the press, although the German goalkeeper is calm and confident of his future.

– The German goalkeeper is not thinking of leaving the Camp Nou, and those close to him say that he has just renewed for five years … he is now focusing on recovery, so that it will be 100% the beginning of next season.

Sources from the MD player environment insist that they have no news from the club and that Ter Stegen will not leave Barcelona, ​​and they state that Mark was renewed for five years last October and he is very clear about which club he wants to be in and where he will be: only Barcelona, ​​where he aims. To be a captain on and off the field and help the club regain their winning version.

Ter Stegen’s renewal was long and thoughtful and succeeded because a goalkeeper’s priority was to stay in Barcelona, ​​despite his demand for a competitive project in which he could continue winning titles. The German, who turned down important club offers, is ambitious and sees green shoots in Barcelona’s net.

Ter Stegen did not finish the season well and had to undergo surgery on his right knee due to a patellar tendon injury, and this will keep him from work for 3 months, which will make him miss the European Cup with the German national team, he will be 100% at the beginning of the season with Barcelona.