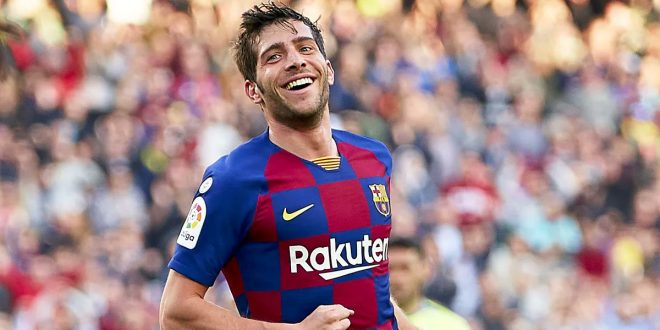 ­
Barcelona club officials welcomed the departure of Sergi Roberto, the first-team midfielder, to the English club Manchester City, during the current summer transfers.

Barcelona wants to get rid of Roberto during the current summer Mercato, before his contract expires at the end of next season on June 30, 2022 in order to benefit financially from his departure outside the “Camp Nou”.

The Catalan newspaper, “Sport”, stated that the three parties (Barcelona, ​​Manchester City, Sergi Roberto) would welcome this deal, although Roberto’s priority is to continue in Barcelona, ​​​​but if the Catalan club does not have the intention to renew, he will consider leaving with Manchester City in the lead.

She added, “So far, Barcelona has not decided Roberto’s future because there is a desire by the administration to renew the team’s blood and sell players to finance special deals.”

It is noteworthy that this is not the first time that Manchester City has expressed its desire to sign Roberto, as there was interest in him by Pep Guardiola, last summer.

In another context, the Dutch midfielder, Frenkie de Jong, confirmed that he is looking forward to showing a better level with his country, the Netherlands, in the Euro 2020, which starts on June 11. “Now everyone is talking about the European Championship, and I’ve seen commercials on TV, it’s very nice, it will be my first tournament,” De Jong told the Dutch website Nu.nl.

He added, “When I was a little kid I used to watch the tournament as a fan of the Dutch national team, I used to draw flags on my cheeks, and I have great memories of the 2010 World Cup, I was able to follow a wonderful generation of players, and now I am here myself.” He continued: “I want to overcome the difficult season with Barcelona, ​​what happened is not good enough, as Barcelona, ​​we want to win more than one cup, although the season was not so bad, especially when you see where we came from.”

And he added: “I feel happy in Barcelona, ​​​​I really hope to continue in the team, because it helps me, and I have not yet shown 100% of the real level for me.”

On the continuation of the Argentine star Lionel Messi with the team, he said: “Messi did not tell me that he would continue directly, but we talk about everything on the field, and it is great to play with him, when I was young he was already the best in the world, and until now, this is not easy.” . He concluded: “When there is a comparison and I can choose between playing with Messi or anyone else, I always choose Messi, it would be foolish not to do that, he is the best in history.”
­ ­