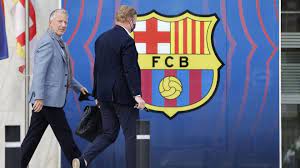 Barcelona sets its sights on a new player

On Monday, a press report spoke of Barcelona’s desire to sign the Napoli star, in light of the failure to sign Liverpool’s Jorginho Wijnaldum.
Barcelona had reached an agreement with Wijnaldum to join Barca, starting from the new season, but Paris Saint-Germain entered the deal, and came close to kidnapping the Dutch player.

And the newspaper “Sport” reported that the failure to include Wijnaldum made Barcelona turn its sights on the Spaniard Fabian Ruiz, the Naples midfielder.
She added that the process of including Ruiz faces many difficulties, due to the hardness of Aurelio De Laurentiis, President of Naples, in negotiating, as well as the difficult economic situation that the Catalan club is going through, as the Catalan club is considering the entry of one of its players in the deal.
And the newspaper added that Napoli set 50 million euros, in order to allow the departure of Fabian Ruiz, aged 25 years.
She indicated that the Italian team will only negotiate the money, as Napoli does not want some players to enter the Ruiz deal.