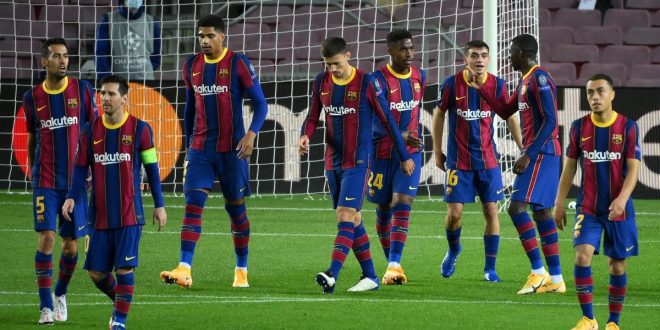 5 new deals for Barcelona and 10 names to leave

According to Spanish press reports, Barcelona, ​​led by sporting director Matteo Alemani, is now working on resolving 5 new deals, and identifying 10 players to leave.
Barcelona signed the duo Aguero and Eric Garcia from Manchester City after the end of their contracts, and the return of Emerson Royal from Real Betis.

The Spanish newspaper “AS” said that Matteo Alemani is required to search for offers for players who have left the club’s accounts, most notably Samuel Umtiti, the team’s defender.
Umtiti’s contract expires in 2023, and he will have to leave, in addition to Junior Firpo, goalkeeper Neto, and right-back Sergi Roberto.
Pjanic also has no future with Koeman, in addition to the duo Philippe Coutinho and Ricky Puig, the duo Braithwaite, the team’s striker, and the Portuguese Trinkao, and Alex Moreba, the young player, who may be out on loan.

These are the 10 players that Alemani seeks to find a way out for them from Barcelona, ​​​​in the first seasons of the sports director and who worked with many clubs, most notably Valencia.
After signing the aforementioned trio, Alemani is seeking to include 5 other players in Mercato this summer for Barcelona, ​​most notably Memphis Depay, the Lyon striker, in addition to a midfielder and left-back.
Alemani will also have to resolve negotiations with the players for a new salary cut, such as Sergio Busquets, Jordi Alba and Gerard Pique.