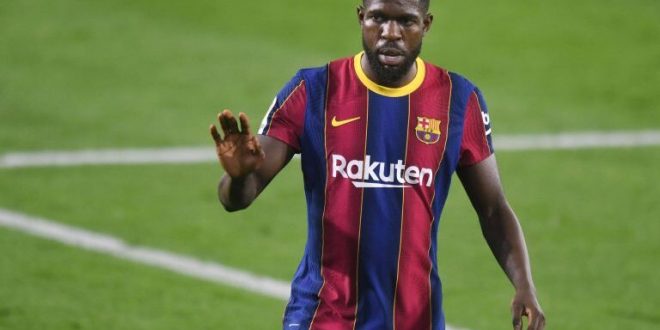 After insisting on continuing , despite knowing it was impossible to pاay, Umtiti surren,ders to Barcelona

It’s clear that Barcelona’s Samuel Umtiti is starting to feel that his time at Camp Nou is coming to an end. And the club at a recent meeting presented all the possibilities it envisioned for it, whether the move to unilateral termination of the contract, as reported by Sport this week.

The Frenchman did not think from the beginning of any of the possibilities because his only goal was the idea of ​​continuing at the club and fulfilling his contract.

Barcelona’s pressure took effect and began to twist the French player’s arm. He is now already considering the possibility of leaving him on loan. Out of fear of being fired, having to litigate with the club to FIFA and earn a bad image at the international level will lead to problems finding future offers.

For these reasons, Umtiti is considering a method that is less harmful to his interests given that he is only 27 years old. Leaving a sale is something he’s contemplating, and now both the club and its agents are analyzing the options the market can offer.

Umtiti, with a net salary of 8 million, has a contract until 2023. The player has not been a regular this season either. His knee problems are continuing and the doctors see no possibility that the Frenchman will continue his career in a top team.

It is worth noting that last Tuesday, on the same day that Barcelona unilaterally terminated Mateos Fernandez’s contract, the Blaugrana administration contacted Umtiti and Pjanic by email and gave them a letter of freedom. It does not matter Ronald Koeman and Barcelona wants to get rid of the high salaries as happens in the cases of the defender and the midfielder, with salaries approaching 8 million euros clean.

The French player, who has two years left on his contract, because he signed for Barcelona in the summer of 2016, will be no loss if he ends up accepting the freedom card and leaving for free. The same is not happening with the Bosnian midfielder, who signed last summer for a four-year term for 60 million plus five other variables, in a process linked to the sale of Arthur to Juventus for 72 million.