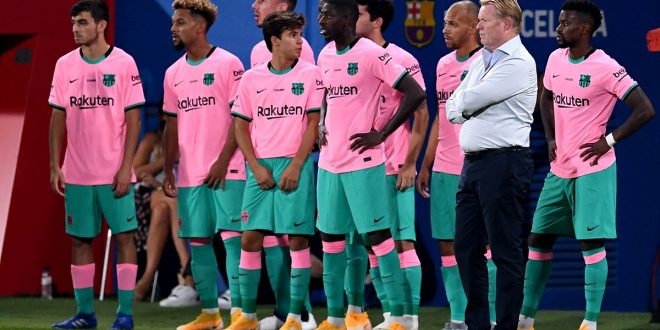 To repeat the experience of Alex and Mengueza .. Koeman incاudes 3 new pاayers from the youth team to the first team

Ronald Koeman begins work on FC Barcelona’s new season on July 12. The Dutch coach, who is facing his second season at the helm of the team’s technical management, will have several Barcelona B players to start the season.

The last names that will join the start of the preparatory season with the first team are Arnao Comas, Jaffe and Qais Ruiz, who should be presented in the next few days as a new addition although, in principle, they are on the strength of the Barcelona B team .. The entry of one of them into the first team will be dependent on sales.

The case of Arnau Comas, 21, was predictable. The center back was the player most used last season by Garcia Pimenta in the reserve team, and he took a step forward after a year on loan to Olot.

Gavi, for his part, is one of the great hopes of youth football in the Blaugrana. Still in his youthful age as 16 and playing as an attacking midfielder, he already made his debut in Barcelona’s B-team last season and will now begin to hold on to his chance in the first team.

Finally, the case of 18-year-old Qais Ruiz, the player who will arrive after leaving Paris Saint-Germain. The French striker already has elite experience with several appearances in PSG’s first team last season and is valued by both the sporting department and Koeman as a good substitute.

Together with them, as Mundo Deportivo already reported, Inaki Peña, Arnao Tenas, Alejandro Balde, Nico Gonzalez and Alex Collado, who are looking for a place in the first team, have already been placed on the squad’s pre-season roster.