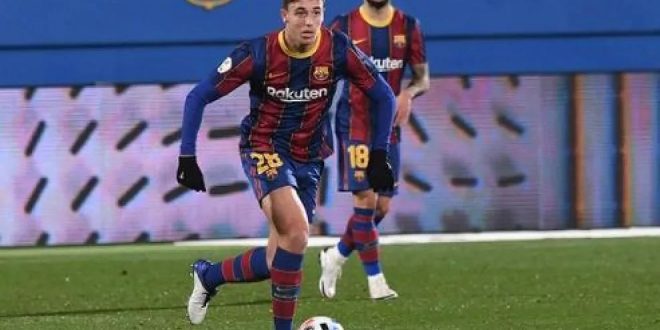 With the arrival of Barcelona’s 2021/22 season, there is growing enthusiasm at the club for the passionate group of young La Masia who will play a key role in the first team for the coming seasons.

No one is in a better position to give his opinion of these more exciting players than Franck Artegua, who served the club with distinction during his 11 years as a youth coach.

Artegua became the coach of the Emirates Olympic team earlier this year and spoke with Marca about the players he has high hopes for.

He is a player the club had high hopes for at the youth level, given his quality and personality. But there have always been questions about him after advancing through the age groups, given the pressures of the competition. But he made his debut at the Camp Nou and did exactly what he was doing on the Ciudad Deportiva Joan Gamper field. I was with him while he was recovering from a serious injury he suffered in the youth team. He is a professional and lives for football and I hope that he recovers as he recovered from the serious injury that he had before.

Oscar Mingusa is the opposite situation, which is a complete surprise: the only coach at the academy who was confident of having the potential to be in the first team was García Pimenta. He has shown that with hard work, dedication and humility, you can become a first team player.

Ricky has the DNA of Barcelona, ​​he is a footballer designed for our style of play, without a doubt. I’m sure the experience he had last season will make him even stronger. He doesn’t give up and has to keep fighting for his dream. I am convinced that his time will come and he will show his worth in the first team.

He is another player that no one doubted that he would be in the first team, especially because of his personality and maturity. Alex Moreba always responds in stressful situations and it shows. Underneath this appearance of a physical player, he hides his best virtue, which is the perfect understanding of our style of play as he grows more under pressure. He also has a great physique, which is very important in today’s football.

I think he is the next to be called up to the first team and show that he is there. He has matured well at Barcelona B and next season he will undoubtedly be an important first team player. He is a player with great technique, he understands our game perfectly, he can score goals, dominate assists and has a winning mentality.

There is no doubt that Alejandro Balde is a player of great quality. He is a winger who has the perfect characteristics for our style of play: fast, strong, good technically, excellent offensively, but I think he has to keep going slow and calm. He must grow up at Barcelona B, mature especially defensively and without haste.

Nico González has everything to be a professional player. He is technically good, has a great physique, is ambitious and, most importantly, very smart. Also, he has soccer blood in his veins.

He’s such a young player, he played last year for the Cadet and shouldn’t be in a rush. He should continue to progress at his own pace, but he is clearly an outstanding player. He is a midfielder who does things very fast. He is competitive like an animal but at the same time there is no need to rush, there is no need to get discouraged, he has to be patient, play a lot and keep growing as he does. I am convinced that in two or three years he will knock on the door of the first team.