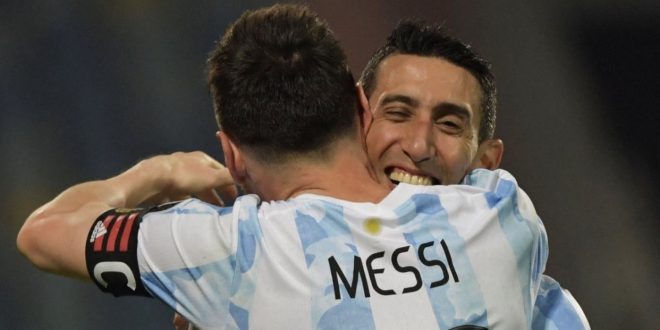 Argentina won the Copa America after beating Brazil in the Maracana stadium in Rio de Janeiro with a clean goal scored by Angel Di Maria in the 22nd minute of the first half.

Di Maria spoke after the match and revealed the conversation he had with his Argentine teammate, Lionel Messi, before entering the field, saying: “I cried after the match because many doubted and criticized this team, but we succeeded in winning the title that we dreamed of.”

He added: “Winning against Brazil at home is a wonderful thing, we came here to win the title and now we have to think about the World Cup.” Then Di Maria, who won the Man of the Match award, touched on his conversation with Messi, saying: “All this was achieved thanks to Messi, and it is a very precious title for us and will never be forgotten. Before the match, I told Messi that he would win the title. He told me this final is the last for me after what happened against Chile and the World Cup .. It should have been revenge today and that is what happened.”

Di Maria did not explain these words and did not clarify whether he meant that this was the final that told Messi to divorce with the Argentina national team, or did he mean his last final in the Copa America, provided that the legend would play the next World Cup in Qatar in 2022 and then retire internationally.

It is worth noting that the Copa Championship that Lionel Messi crowned today is his first international title with the Argentine national team, while it is his second international championship after winning the 2008 Olympics.