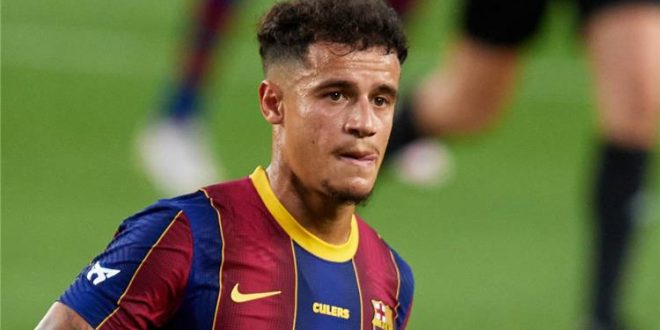 Marseille finds an inn0vative soluti0n that satisfies Coutinho to sign

Philippe Coutinho’s future with Barcelona has become uncertain after the club’s financial crisis and the player’s unsatisfactory level, and the Catalan club is looking for an outlet for the Brazilian and can find him at Olympique de Marseille, who has shown interest in the player, according to L’Equipe.

L’Equipe reports that the process can be facilitated by the entry of a strong sponsor, and they will offer him a transfer bonus of 10 million and 6 million annual salary.

Coutinho’s salary, according to French media, does not correspond to the financial situation of FC Barcelona, ​​which cannot afford a net of 12 million euros annually, and this amount cannot be met by Olympique de Marseille, who is studying other ways to persuade the Brazilian.

And as L’Equipe confirms, Marseille believes that the solution may be to give Coutinho a €10m transfer bonus and a salary of €6m a year – figures that are not equal to his earnings at FC Barcelona, ​​but are no less important at the time of cutbacks in all teams.

The information adds that this operation, one of the largest to be carried out by Olympique de Marseille, can be facilitated with the help of a strong sponsor. The French club will play in the Europa League this season and qualify directly for the group stage.

Coutinho arrived at Barcelona in the winter market 2018 from Liverpool for 120 million euros in addition to 40 variables, m with a contract until June 2023.