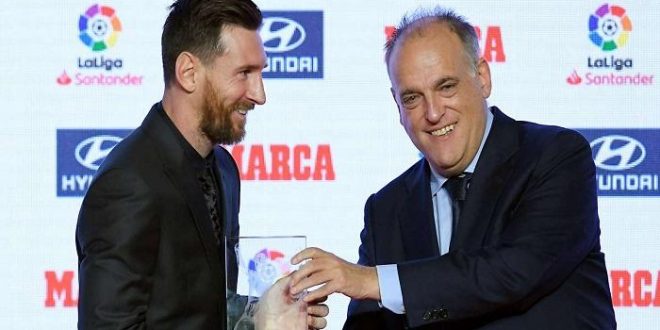 The Spanish Football League “La Liga” gave the green light to Barcelona’s administration to register players whose contracts had expired, led by Argentine star Lionel Messi, after the Catalan club succeeded in overcoming and reducing the exorbitant mass of players’ salaries.

And the Spanish newspaper “AS” revealed, today, Saturday, July 10, that the league gave Barcelona permission to register Messi after negotiating the values ​​of his new contract and signing it, and the official announcement of the renewal will be very soon.

The newspaper reported that negotiations between Barcelona President Joan Laporta and La Liga President Javier Tebas ended with Barcelona giving the green light to keep the Argentine star in the Spanish League.

And the newspaper revealed that Laporta asked Tebas to speak with Jorge Messi, the father of the Argentine star, and tell him the details of the agreement between them until he agreed to the terms of the contract, explaining that the new contract would give Messi a minor. . His salary in the first season 2022/2021, after which his salary will increase in the second season, but he confirmed that the Catalan club refuses to disclose the value of the new contract.

As Fabrizio Romano, a journalist for Sky Sport Italia, said on his Twitter account, also today Saturday: “Nothing new, Messi will sign his new contract with Barcelona until 2023 after the Copa America.”

And Barcelona had announced during the last period the isolation of many players, such as Carles Alenia, who was loaned to Getafe, and his player Trinkao was loaned to Wolverhampton in England, and he recently hired Argentine Sergio Aguero and Dutchman Memphis Depay to support the team. attack. next season’s streak.

And the French newspaper Kep confirmed that Argentine star Lionel Messi has been losing 100,000 euros a day since July 1, the day his contract with Barcelona, ​​the third in the Spanish League, expired.

During his football career, Messi did not join any club other than Barcelona.

• Messi is the most participating player in the history of Barcelona.

• Messi played in the Barcelona shirt 778 matches in all competitions

• Messi is Barcelona’s best scorer ever