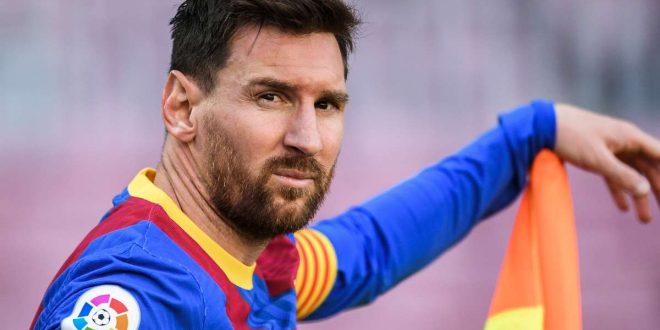 While Barcelona club president, Joan Laporta, confirmed that negotiations to renew the contract of Lionel Messi, the star of the Catalan club, are on the right track, the Argentine star surprised everyone by visiting the US embassy in Argentina to obtain a travel visa.

Messi’s contract with the Blaugrana expired on June 30, but the club has yet to announce a renewal as they are trying to find ways to comply with La Liga financial fair play rules and balance their books before the start of the 2021/22 season. Meanwhile, Messi won his first America’s Cup with Argentina after beating Brazil 1-0.

And Argentine reports stated, today, Thursday, that Lionel Messi was at the American embassy in Argentina, Tuesday, with his father, to obtain a travel visa to the United States of America.

And it was previously reported that the Argentine star may end his football career at Inter Miami, which is owned by David Beckham.

He continued: “All the Catalans, Barcelona and the entire football world are happy for Lionel Messi to win the Copa America.

He added: “It is so exciting to see the best player in football history so excited to win a title like this and made us all cry with joy.

And the Barcelona president continued: “He is very happy, we are all happy, and I am happy for Leo who managed to win the America’s Cup, along with his teammates, and that Argentina are again in the elite, and I am also happy … for Sergio Aguero.”

Despite the difficult economic conditions that FC Barcelona is going through as a result of the outbreak of the Corona virus, the Catalan club is keen to renew Messi’s contract, given the news that there are several clubs monitoring the Argentine center, among which Manchester stands out. . City and Paris Saint-Germain.