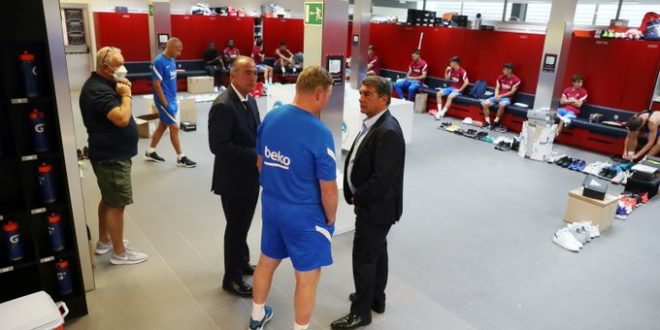 Despite his departure from the Spanish League several seasons ago, but Cristiano Ronaldo remains stuck in the minds of the Catalan public, the Portuguese striker is the undisputed protagonist of one of the walls of the Barcelona dressing room, where he reminds everyone of the danger of the Cor0na vi rus.

Imagine that in the Real Madrid dressing room some data or news about Leo Messi was hung and kept for the whole season? Well, something similar is happening in the dressing room of Barcelona’s first team in Sports City John Gamper, with one of the players most hated by Barcelona fans in the past decade.

We refer to the current Juventus star, Cristiano Ronaldo, who has been present for several months in the dressing room, without anyone removing him from the club.

“Cristiano has returned to show a positive result for covid 19 and is absent against Barcelona.” , This is the address hanging on one of the locker room walls, as a warning, so that everyone realizes that even those who take care of themselves more and better can also be victims of the epidemic, so everyone should take the utmost precautions.

Also, in the same media poster, it is stated in red letters that “competition is at stake” as well as “the rules must be met,” a clear reference to the fact that you can in no way lower your level of caution with the pandemic.

In fact, it is not the only poster on the walls of Barca reminding and warning of the dangers of the C0rona vir us: on the board presiding over the dressing room, there are also several LaLiga posters where everyone is reminded of the precautionary safety regulations, in Spanish and English.

But it is clear that Cristiano’s media poster is the one that attracts the most attention from players and staff, because it is not every day that your greatest enemy becomes your ally to avoid falling into the traps of the epidemic.