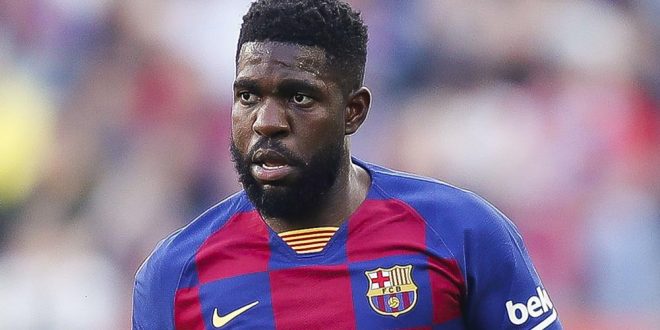 Spanish press reports revealed the existence of advanced negotiations between the Spanish teams Barcelona and Olympique Lyon, about the inclusion of the Catalan player to Lyon Palmerto this summer.

And the Spanish newspaper, “ESPN”, said that the management of the French club Olympique Lyon is planning to include defender Samuel Umtiti from Barcelona, ​​in light of the player’s completely out of the accounts of his Dutch coach, Ronald Koeman.

But the Spanish newspaper revealed a huge obstacle that compensates for Samuel Umtiti’s departure from the Camp Nou walls, which is his high annual salary, and Lyon wants to include him in exchange for Barca bearing half of his salary.

The Barcelona administration welcomes the departure of 3 players during the current summer Mercato, whether on loan or final sale, to reduce the high wage bill at Camp Nou, they are Samuel Umtiti, Martin Braithwaite and Miralem Pjanic.

Barcelona will have to dispense with a number of first-team football players in the club, to provide a financial balance between wages and revenues, to register the new contract for the Barcelona captain, Lionel Messi.

The Catalan giant’s administration plans to empty the first football team of a number of players, who are outside Ronald Koeman’s accounts, as well as receive huge annual salaries.

Barcelona’s management strongly desires the departure of French defender Samuel Umtiti from the club’s first team before the start of the Blaugrana’s preparations for the new season.

And the Spanish newspaper, “Mundo Deportivo”, said that the Barca administration informed Samuel Umtiti that the team did not need his services, seeking to terminate his contract by mutual consent with the Blaugrana.

But the newspaper’s report indicated that the player refuses to leave, and adheres to the continuation of his contract with the Spanish giant, despite his departure from the team coach Ronald Koeman’s accounts completely.