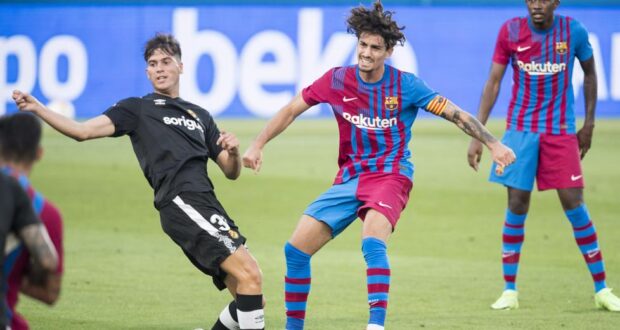 Alex Collado announces it from the beginning.. Returning to barcelona B means leaving

The midfielder, who scored a goal against Nastic, confirmed that he has no intention of playing another season in reserve and that he will try to make an impact in Koeman’s plans.

Despite his youth (22 years old), he has very clear ideas. The striker, who has worked with the reserve team for three years, decided it was time to take the leap. This means that he will not accept in any way a return to the Barcelona B team, not even on the condition that he enters the dynamics of the first team in some matches next season and plays for Sergi Barguan’s team.

He made his decision and explained the matter after the friendly match against Nastic, saying: “I will not play with the reserve team again. Either I stay in the first team or I leave, but my priority is to fight to stay here, but I do not know. Thing.

Indeed, Collado saw how the club exercised a clause on March 30 allowing him to renew his contract until 2023, as long as he was close to joining the first team. Hence, Collado is convinced that he is a first-team player for all intents and purposes.

In any case, Collado did not play for a minute with Koeman last season, a rather strange situation in the club’s sporting management, since the striker made his debut with Valverde two seasons ago.

Collado, a skilled striker, played the second half against Nastik and eventually scored, hopefully, when an opponent blocked his shot, misleading the goalkeeper.

Ronald Koeman left the Johan Cruyff stadium with a smile and satisfaction with the performance his players showed against Nástek de Tarragona and praised the excellence of young players such as Demir, Collado, Baldi and Ray Manaj.

And about the match against Nastic, he said: The result is positive, we press and control the opponent, especially after his player was sent off. We should focus on the material side, it will be important. You have to bring out the youth.”

Physically: “I see that my players are doing well, they are back well. We also trained hard this morning. We have to develop physically. With two different teams, everyone was able to show their quality. It is not necessary to mention the names that I grew up from.”

The crowd in the stadium: “It was a bit strange to see the fans in the stadium, but fortunately things are starting to get back to normal. I like to have an audience and the players too. They help us. We really need them.”

Preparation for the season: “The matches against Stuttgart and Red Bull Salzburg will be at the highest level and will be a good opportunity to determine the readiness of our players. In the next few days, the rest of the players will join the group and we can all train together.”