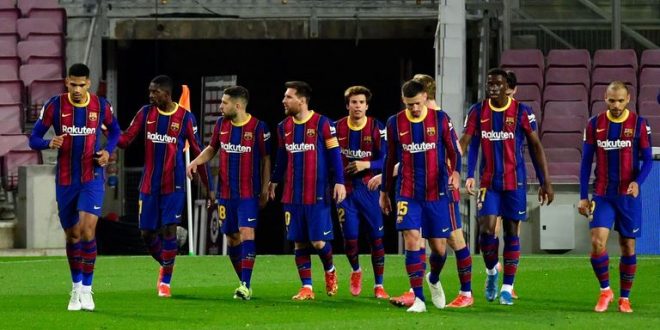 Arsenal shows interest in the owner of the crîses in Barcelona. Wiاl Barca finally get rid of him

gool 27 يوليو، 2021 barcelona التعليقات على Arsenal shows interest in the owner of the crîses in Barcelona. Wiاl Barca finally get rid of him مغلقة 246 زيارة

Arsenal seeks to strengthen its ranks next season in order to return to the competition for the titles again.
Arsenal have shown an interest in Barcelona star Ousmane Dembele, and the Frenchman could consider leaving Barcelona this summer as he continues to delay signing a new contract.

He has entered the last 12 months of his current contract and Barcelona want to keep him with the renewal for next season.

However, Barcelona’s poor financial situation means that losing them for nothing next summer would be a disaster and they are trying to avoid that by offering him a new contract.

The striker does not respond positively, and Mundo Deportivo confirms that Barcelona warned him either to sign the new contract or he would not play.

The report said that if you decide to terminate your deal, you will be sidelined for the whole year, which would not be an ideal situation for your career.

This development may have opened the door for Arsenal to get their man and means they could leave Catalonia for the Emirates this summer for a very cheap fee.

This would be Arsenal taking advantage of Barcelona’s unwillingness to leave for free.

It is not yet clear how much it will cost Arsenal, but Transfer Makart estimates the 24-year-old at €50m.