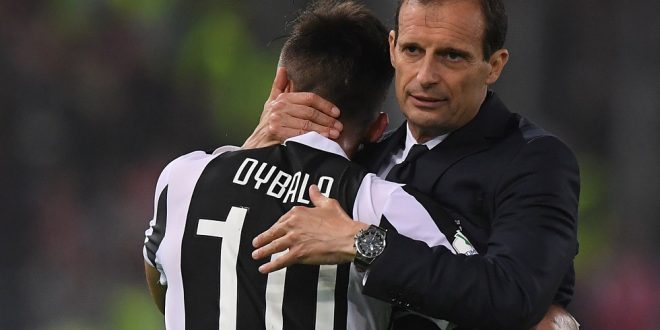 Allegri: I rejected Real Madrid twice and Dybala could be a leader over Ronaldo on the field

gool 28 يوليو، 2021 barcelona التعليقات على Allegri: I rejected Real Madrid twice and Dybala could be a leader over Ronaldo on the field مغلقة 188 زيارة

Veteran Italian coach Massimiliano Allegri admitted, today, Tuesday, July 27, his refusal to coach Real Madrid twice, the last time several months ago, while the president of Real Madrid, Florentino Perez, thanked him for the “opportunity” that gave him. .

“I have to thank Real and the president (Florentino Perez) for the opportunity he gave me,” Allegri said during the press conference to present him as the new coach of Juventus, succeeding Andrea Pirlo.

Allegri did not sign a contract with any club after his departure from Juventus two seasons ago, and one of Meringhi’s goals was to appoint him to a managerial position, but the Real Madrid management decided in the end to use the services of Italian veteran Carlo. Ancelotti, after Allegri signed a four-year contract with the “Bianconeri”, where he will meet again with Portuguese star Cristiano Ronaldo, whom Allegri trained previously in the 2018-2019 season.

From Allegri’s press conference after his return to Juventus

Allegri said of the Portuguese star: “Ronaldo is a great hero, an exceptional player and a very smart one. I spoke with Cristiano, and I told him that this year is very important, and I am happy to see him again, and that he takes responsibility on his shoulders greater than it was 3 years ago.”

And about his Argentine player Paulo Dybala, he said: “It will be an important year for Paulo, I have seen him in great physical and mental condition, it is a great added value for us, I expect a lot from him, I have spoken.” with him and found him very enthusiastic, and I am especially satisfied with his enthusiasm.”

Allegri added: “The numbers come with him, he can show his value this year, Dybala is 28 years old and he is mature, I left him as a child and now I met a man who scores goals and passes exceptional balls. I believe in him a lot and I ask him a lot.”

Coach Massimo Allegri talks about his return to Juventus

Allegri, who trained Dybala during his first stage at the head of the technical direction of Juventus, returned to the club to lead him next season after the dismissal of Andrea Pirlo from his position, in the context of the poor results and numbers of the last team. season.

Allegri trained his Argentine player, Dybala, nicknamed “La Joya” between 2014 and 2019, during which the player scored 78 goals. The coach also mentioned during the presentations conference that Paulo Dybala will be the second captain of Juventus next season.

In response to a question about Giorgio Chiellini, who is considered the oldest player in Juventus ahead of Dybala, he said: “At Juventus, the captain and his replacement are determined by the length of time the player spent with the team.”