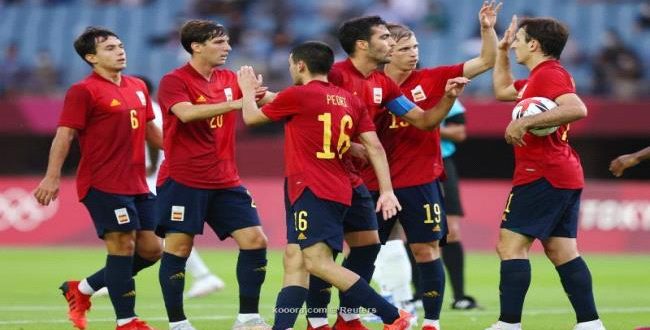 gool 1 أغسطس، 2021 barcelona التعليقات على The agent of the Spanish Goals Machine offers him to Barcelona in an exchange with Braithwaite or Rey Manaj مغلقة 1,059 زيارة

The 1.91 tall striker is considered an attacking standard and a great dominator of the passing game, he is one of the modern strikers in Spanish football, and taking into account the economic situation of the major clubs in Europe, the selection of Rafa Mir wins. In many teams that want to strengthen the offensive side.

The Wolverhampton striker resonates with his name in the market, and more after scoring a “hat-trick” for the Spanish Olympic team against Ivory Coast, Barcelona said “no” to the process months ago, but the option
Returns to the table.

Huesca striker Rafa Mir starred with the Spanish Olympic team against Ivory Coast with a hat-trick that put the team in the semi-finals.

And the Wolverhampton-owned striker has been so enhanced in recent months that his representative, Jorge Mendes, has offered him to Barcelona.

It was first offered to him months ago, but on that occasion Barcelona rejected the offer, and now the striker’s good work is once again making his name an option being considered by Barcelona, ​​who hope to sell both Braithwaite. Ray Manaj in the next few days. .

Rafael Mir is hoping to return to La Liga, where he scored 13 goals in the league last season and three more in the Copa del Rey. The English are ready to exchange, although in this case it will be necessary to know the players in Barcelona who will adapt to the Wolverhampton project.