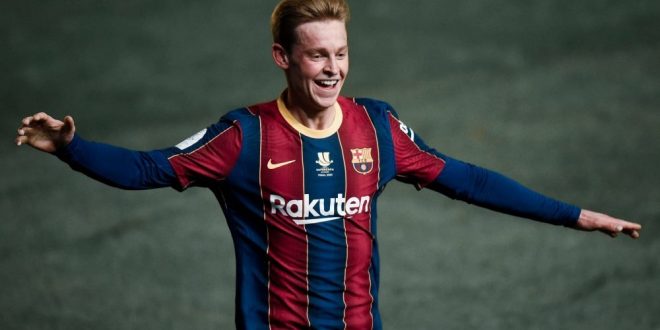 De Jong is looking for a competitor in Barcelona and beاieves that he is the best.

gool 2 أغسطس، 2021 barcelona التعليقات على De Jong is looking for a competitor in Barcelona and beاieves that he is the best. مغلقة 164 زيارة

Dutch Frenkie de Jong, Barcelona player, is looking for a better player than him in his team, how is this and Messi is his captain in the team! ..

De Jong thinks he is the best PlayStation player in Barcelona and no one can match him in this game.

Is there a rival for De Jong in Barcelona?
A match between De Jong and teammate Serginio Dest was streamed live on Instagram and was widely followed even by his teammates Gerard Pique and Braithwaite.

Frinke won 5-1 and commented on this match in an interview with the Catalan daily Sport, saying: “I beat Dest with Juventus, but I also beat Braithwaite easily. Let’s see if anyone can beat me.”

And about Sergi Roberto and if he could fall in front of him on the PlayStation, he replied: “I think I played with him last year and beat him.”

The Dutch player stressed that the PlayStation is a form of entertainment for players to break the boredom of the camps, as they train twice a day.