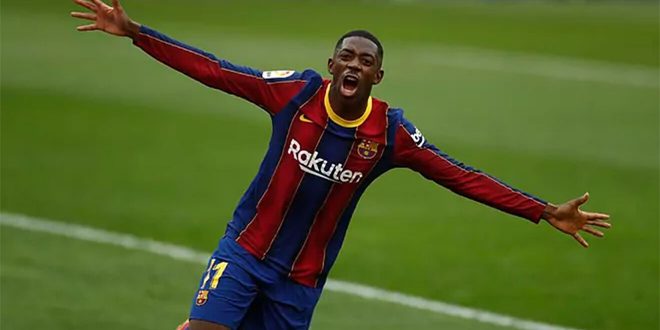 Dembele’s contract with Barcelona is set to expire at the end of next season, so he can move to any club he wants.

Spanish press reports revealed that Barcelona is approaching the renewal of French star Osman Dembele, during the current period.

Barcelona continues to work on reducing the wage bill in the first team and one of the other issues on the table that the Catalan club must resolve this summer is the renewal of Ousmane Dembele’s contract, which will expire in 2022. There has been a sudden change in the context of the relationship between Dembele and his agents with Barcelona and it appears that The player is now ready to pay off his debts to the club, which has endured multiple absences due to his frequent injuries.

Barcelona sources confirmed to Mundo Deportivo newspaper that the harmony with Dembele’s surroundings was very positive about the renewal of the striker’s contract, and there is a lot of optimism through which an agreement can be reached to ensure his continuation in the Camp Nou instead of Ronald. Koman will love you very much. Many.

In the phone calls with Moussa Sissoko, Dembele’s agent, there is talk of reducing the Frenchman’s salary to adapt it to the current economic situation that the entity is going through, as well as the role that the player will play once he returns from. his injury. The arrival of Memphis Depay and the return of Ansu Fati are almost without options to play on the left wing, but the departure of Trinkau, on loan to Wolverhampton, leaves the attacking right wing and Dembele’s favorite center empty.

After these positive contacts, it seems clear that Dembele will not leave Barcelona as a free player next summer, which is the club’s great fear. The striker is one of the most expensive deals in Barcelona’s history, having reached an agreement in 2017 for a fixed €105 million plus 40 variants, 30 of which have already been paid, in exchange for his signing with Borussia Dortmund.

If the French international left Camp Nou for free, it would be a devastating process for the Catalans. If there is no agreement, Barcelona is clear that Dembele will not play this season and will witness the matches from the stands.

It must be remembered that Dembele is on his way to recovering from the torn biceps femoris tendon in his right knee he suffered in the last European Championships with France against Hungary, an injury that forced him to undergo surgery in Finland for which he will have at least four months of rest.

In this first phase of his recovery, Dembele is working in Paris with club physiotherapist Xavi Allen so that he will be in the best possible condition upon his return to Barcelona. In Barcelona, ​​they do not want to risk the return of Osman due to his injury history.