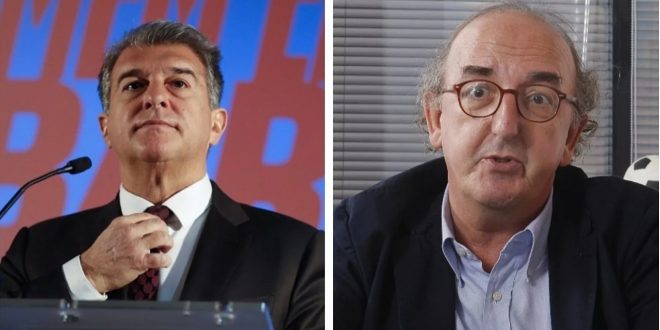 A Laporta supporter: Messi’s registration in the League was completely agreed upon, bʉţ…

One of the most important supporters of Barcelona President Joan Laporta talked about the real reasons behind not reaching an agreement on the renewal of the legend of the Catalan club, Lionel Messi.

Jaume Rores, founder of the famous Spanish media and cinema company, Media Pro, who was one of the supporters of Joan Laporta’s candidacy for the presidency of Barcelona in the recent elections, said today, Friday, that “Messi’s registration in the League was completely agreed upon several days ago.”

Today, President Joan Laporta explained in a press conference the reasons why it was impossible to renew Lionel Messi’s contract at FC Barcelona. The leader initially said: “We have received a disastrous inheritance and the players’ salary bill represents 110% of the club’s income. We do not have a salary margin. The rules that govern La Liga set some restrictions,” he commented at the outset. “We’ve known that since we got to the club.”

Laporta explained that the reasons for not renewing Messi’s contract in essence “are the economic situation of the entity”, which did not allow an investment of this size: “We were ready to do this, but we do not have a salary margin, we exceeded it.” He accused the former president, saying: “The previous disastrous administration went over the limit and we did not have time to reverse this situation.” There is a series of contracts which if unilaterally terminated, also carries risks.

Speaking to RAC1 radio, Roris said: “I know for sure that the Messi issue was raised and resolved positively by the club and the League. 48 hours ago, the agreement was ready to be announced, but something happened.”

According to Roris, President Joan Laporta and La Liga President Javier Tebas enjoy a “very good relationship” and Barcelona’s contract with Messi “was settled and written days ago.”

Therefore, in his opinion, the Argentine star’s lack of renewal “has more to do with sports planning than economic discord.”