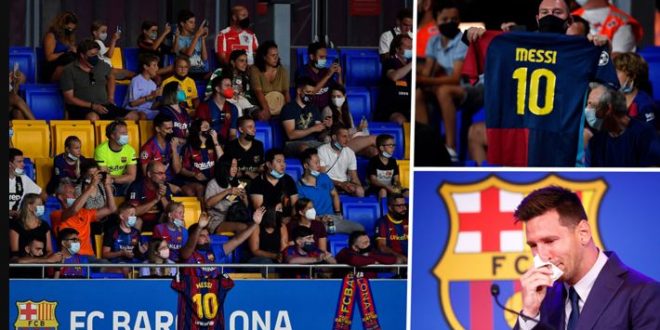 The economic crisis prevented Lionel Messi from continuing in Barcelona, ​​​​to move to Paris Saint-Germain for free at the end of his contract at the Camp Nou, a contract that can only be described as really strange.

This was revealed by the Spanish newspaper “El Mundo”, which had previously leaked the details of Al-Flea’s last contract with Barcelona, ​​which was signed in 2017 during the period of resigned President Josep Maria Bartomeu.

It seems that Bartomeu wanted to lure Messi in various economic ways, to the point that he put a paragraph called “Fidelity” even though the Argentine’s career for the Catalan club will follow.

What is the history of the loyalty clause in the Messi and Barcelona contract?
According to the newspaper, Barcelona owes about 39 million euros (38,964.977) to Messi as a loyalty reward for his continuation at the club until the last day of his contract.

The strange contract stipulated that Messi would receive this amount if he remained until June 30, 2021 in Barcelona, ​​even if he did not renew his contract, as happened in the end.

The newspaper revealed that Barcelona should have paid this legendary bonus to Messi on July 15, and it is not yet known whether the Joan Laporta administration paid it or not.

What are the leaks from Messi’s last contract with Barcelona?
According to what was published in El Mundo newspaper, Messi’s annual salary with Barcelona in his last contract, which he signed in 2017, is 138 million euros, in addition to variables and incentives.

El Mundo newspaper also indicated that the total that Lionel Messi will receive by the end of this contract is 555 million and 237 thousand and 619 euros.

Other news from French newspapers indicated that Messi received 50 million euros as a reward for his free transfer to Paris Saint-Germain, and that his father received another 15 million euros.

The 34-year-old has a two-year contract with the French club, with the option to extend it for another year.