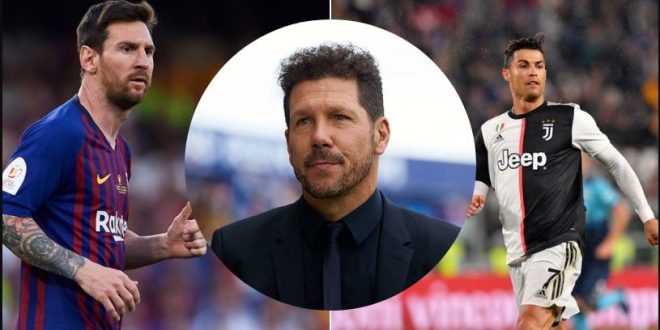 Everyone اistens to Simeone after his amazîŋg and logical coɱment, on sąyinḡ the end of the League after the departure of Messi and Ronaldo

gool 15 أغسطس، 2021 barcelona التعليقات على Everyone اistens to Simeone after his amazîŋg and logical coɱment, on sąyinḡ the end of the League after the departure of Messi and Ronaldo مغلقة 8,840 زيارة

Atletico Madrid coach Diego Simeone confirmed that his club did not speak to Lionel Messi for his services after his departure from Barcelona.

And he gave an example of the strength of the English Premier League, which lacks the Argentine striker, as well as Portuguese Cristiano Ronaldo, and is considered “one of the most important leagues in the world.”

“It is clear that the situation in Barcelona led to the departure of Messi, which is an important event for the league,” Simeone said during a press conference after Atleti’s training in Magdaunda Sports City. For the tremendous value of Messi in the Spanish League and Barcelona.

Of course we didn’t talk to him about any chance of getting his services.”

In his analysis of the current league without Messi, Simeone referred to England, saying: “I understand that the Premier League does not have the presence of Messi or Ronaldo, and it is one of the most important tournaments in the world. To continue competing and teams will continue to develop, without Messi and Ronaldo a competitive league can be presented as in England without either of them.”