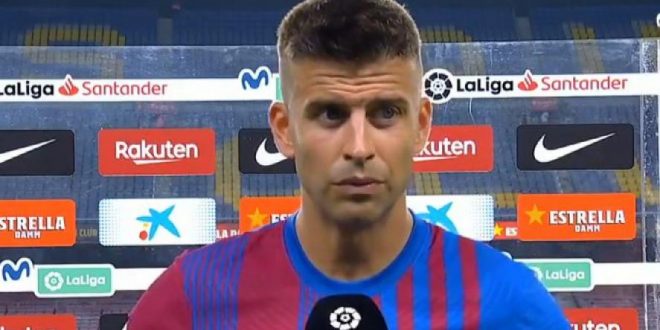 Pique sąyʂ: I play for Barcelona now for $4

The Catalan international, Gerard Pique, appeared in a live broadcast on “Twitch”, after Barcelona’s big win over Real Sociedad 4-2, and he talked about several things, including the issue of salary cuts, and Messi’s farewell.

Barcelona captain Pique was the first to cut his salary to help the club score new deals to deal with a salary cap crisis.

What did Pique say about wage cuts?
“From day one we have been open to a wage cut,” Pique said. “I am the first to cut my salary, but the rest these days will do the same, I wanted to clarify this to avoid misunderstanding.”

“It’s the beginning of an era without Leo, but we’ll have a lot of positive emotions,” he continued.

Then he continued with a laugh: Now I play for Barcelona with a salary of 4 dollars.

Pique spoke about his feelings after scoring the goal and said: “I have been playing without an audience for 17 months and people are terrified, that was wonderful, especially after the crisis of Messi’s departure.”

“We have a team that can compete until the end of the season and today is the first step,” he added.

As for Messi’s farewell, Pique answers
He said: “It was tough, I’ve known him since I was 13, he made us all better, we have to accept that (leaving) because it’s true, we’re all going to take a step forward to be competitive.”

He continued: “Barcelona must look at La Masia, a very strong generation coming, many young players of high quality, La Masia is everything for us, we cannot put it aside.”

Regarding the leaks of Perez and the referees of the league, what did Pique say?
Pique commented sarcastically and told the live broadcaster about the Real Madrid leak crisis: “Don’t worry too much about Madrid, they will come out after that with the audio recordings.”