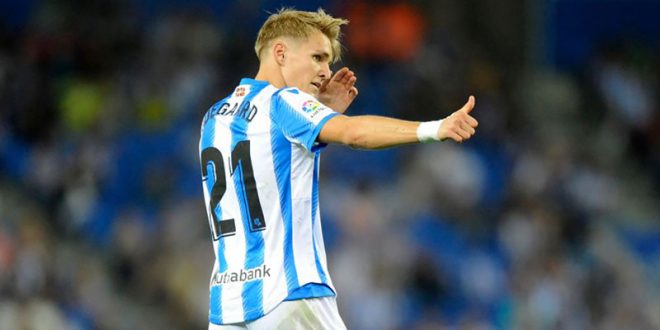 Barcelona cاause in Odegaard’s transfer from Real Madrid to Arsenal

Defensa Central revealed that Real Madrid deliberately put a special clause in the Norwegian Martin Odegaard’s contract when he moved to Arsenal, as the clause prevents the player from contracting with the Catalan club.

Despite the fact that Real Madrid will not have the option to buy back Martin Odegaard, the white club will guarantee a certain strength in the future of the Norwegian footballer twice: on the one hand, with the first right of refusal in the event of a sale by Arsenal and another with the clause “against Barcelona”.

Martin Odegaard and Real Madrid did not have the expected “marriage” and now that their paths have parted with the departure of the Norwegian footballer to Arsenal, the white club wants to make sure that despite everything, the Norwegian’s move to a direct competitor in the league is feared.

It must be remembered that Barcelona was behind the signing of Odegaard at the time, the Scandinavian is a footballer who suits Barcelona’s style and Real Madrid knows that Laporta, at least he has the opportunity, can launch himself to sign him if he succeeds in overcoming the financial crisis. To make him the new Ito.

For all this, Real Madrid has been negotiating with Arsenal on certain conditions for the midfielder’s transfer, including a right of first refusal and above all a clause against Barcelona.

This means that the white club will have the possibility of recovering the Norwegian by paying the same amount that any buying club agrees with Arsenal. It is the same formula that was used at the time with Achraf Hakimi.

In addition, Real Madrid has a particular interest in Odegaard not being able to stop at the Camp Nou for at least the next few years. With this clause included in his contract, the Whites ensure Laporta will not be able to get bogged down in the Norwegian’s short-term future.

This is not the first time that Real Madrid has practiced this kind of condition, it has also happened in the past with other players. In Odegaard’s case, there is more reason than ever that he is a player the White Club believes will stand out and will come like a gauntlet for an eternal contender.

This article has been translated from the Defensa Central Network