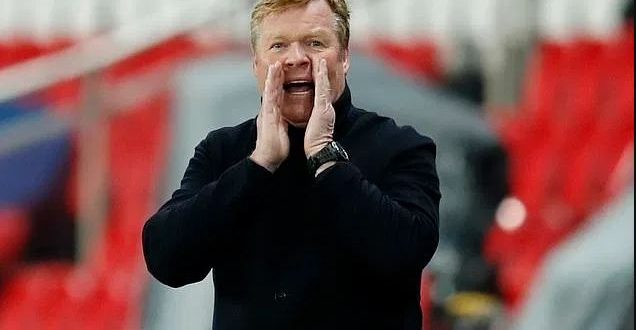 koeman before barcelona vs real madrid

Dutch coach Ronald Koeman came out of Barcelona at the press conference after tonight’s victory against Getafe with two goals against a goal. Ricky didn’t get a single minute in his first three championship matches.

Regarding Griezmann, he was particularly annoyed by some of the whistles fired at him by the Camp Nou fans: “As a coach, I cannot understand that one of our players gets whistled. You can whistle if he has no attitude or business, but Antoine had difficulties in the match. He wasn’t as lucky as we’d hope, but it’s just one match.”

Koeman was insistently asked about the French player and he was always by his side: “I could ask him to score four goals… but we didn’t create chances for him either. Besides, we lost a lot of balls in the second half.”

The Dutchman did not want to persist in his complaint about the surplus in the squad and explained, “I don’t ask anything from the club, we’ve worked together for a while and I always try to speak clearly. You have to understand the economic situation of the club, seeing the injured players and how the team is, it was important to win. We have three or four days in the market and if nothing can be done then we will act in the same way.”

Koeman avoided personalization when asked about Rikkie Puig, but everything was understandable: “The players know I’m thinking in that sense and that’s enough.” “We have four or five injured people and when they come back, the situation will become very complicated,” the coach recalled.

On the positive side, the coach spoke about the two youngsters Nico and Jaffe. “With them we were better at positioning with the ball, we had more ball in our power. I am very happy with their game and their personality.”