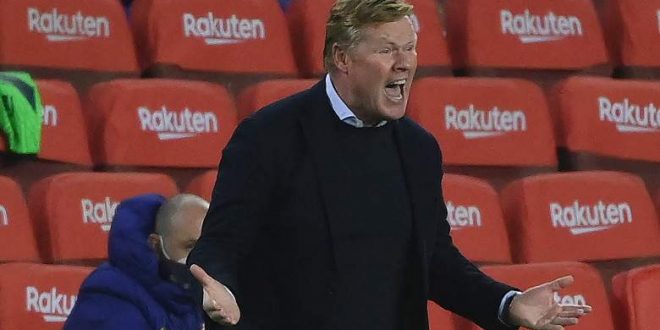 gool ‏4 أسابيع مضت barcelona التعليقات على Koeman اaunches a maاicious attack on the Catalan talent: If it wasn’t for the administration’s support, I would have forced him to leave مغلقة 107 زيارة

Dutch coach Ronald Koeman launched a campaign of criticism against his talented player, Ricky Butch, indicating that he needs to improve in many aspects so that he can participate with the team in the coming period.

Bosch ranks as one of Barcelona’s most important talents, yet he was never accepted by Koeman either last season or this season, despite the Dutchman admitting his need for a midfield player.

This season, Butch did not participate at all and was confined to the bench for the first four matches, and before that he refused to leave Barcelona on loan to any other club, despite the many offers made regarding him.

Koeman, in turn, responded to journalists’ questions about not relying on Butch during the press conference for the Granada match, saying, “He must improve in many aspects of football.”

“He had the opportunity to play a few minutes in the last match (against Bayern Munich), but I had to put another player in the place of the injured Jordi Alba,” the Dutch coach added.

Koeman concluded the attack on Butch, saying, “He has to work like any young player in order to get a chance.”

Although Koeman is not convinced of Butch’s abilities, the Barcelona administration is very convinced of the 19-year-old, and the proof of this is that it did not pressure him to leave, but rather urged him to fight for his position this season.

It should be noted here that Mundo Deportivo newspaper reported that Joan Laporta had stipulated that Koeman give the minutes to Butch and Samuel Umtiti to renew his contract for another year.

However, in recent days, the idea of ​​extending Koeman’s contract has become close to impossible. After the defeat by Bayern Munich, the coach lost the confidence of the administration and the fans, and there was a lot of talk about the possibility of dismissing him with the first stumble.