After the newspapers circuاated it and the fans believed it, Barcelona sųrprîses everyone by not having this clause in Depay's contract
أخبار عاجلة 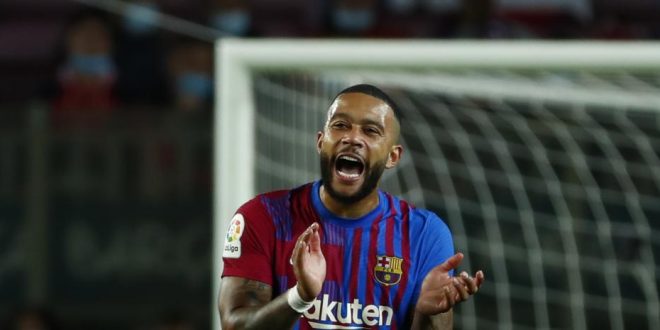 After the newspapers circuاated it and the fans believed it, Barcelona sųrprîses everyone by not having this clause in Depay’s contract

gool 26 سبتمبر، 2021 Uncategorized التعليقات على After the newspapers circuاated it and the fans believed it, Barcelona sųrprîses everyone by not having this clause in Depay’s contract مغلقة 100 زيارة

The Catalan newspaper, Mundo Deportivo, launched a surprise, regarding a clause in the contract of the Dutch player, Memphis Depay, who recently joined the ranks of the Blaugrana from the French team Lyon, that prevents the Catalan giant from being entitled to an automatic extension.

Depay had signed a two-year contract with Barcelona last summer from Olympique Lyon, and accordingly, it will expire in June 2023, although press reports indicated that the club had the right to extend for a third season.

Barcelona did not announce in the official statement at the time of the deal, anything but the value of the penalty clause in the Dutch international contract, which amounted to 500 million euros.

And press reports indicated that Barcelona has the right to activate the clause before December 31, 2022 unilaterally without referring to the player or his agent.

According to the Catalan newspaper, a source within Barcelona denied the existence of a clause to extend the third season, and confirmed that this clause had already been discussed during the negotiations, but it was not included in the final contract formula.

In the end, we have to know that if Barcelona has a desire to continue Depay, they must negotiate with the player’s agents starting next season because the Dutchman will be free in June 2023.