After his remarkable briاliance, Barcelona is waiting for the Ajax Amsterdam sŧar to sign him on a free transfer.
أخبار عاجلة 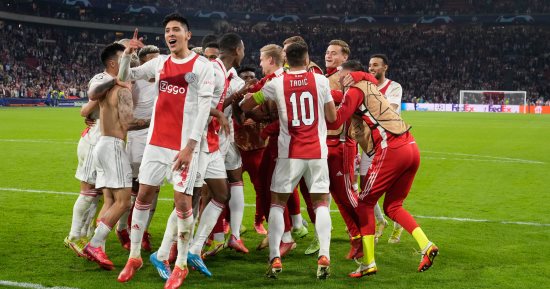 After his remarkable briاliance, Barcelona is waiting for the Ajax Amsterdam sŧar to sign him on a free transfer.

gool 4 أكتوبر، 2021 Uncategorized التعليقات على After his remarkable briاliance, Barcelona is waiting for the Ajax Amsterdam sŧar to sign him on a free transfer. مغلقة 41 زيارة

Press reports revealed that Barcelona’s board of directors, headed by Joan Laporta, is striving to strengthen its ranks with a special deal from the Dutch league.

Barcelona suffers from a clear numerical shortage in the right-back position, in light of Jordi Alba’s frequent injuries due to the pressure of matches on him. Therefore, Blaugrana officials set their eyes on the player Mazraoui, the back of the Dutch club Ajax Amsterdam, to provide this center with a numerical increase.

According to what was published by the Spanish newspaper, “Vecaches”, Barcelona is looking for a right-back to strengthen the right side in its ranks, and it will not need to pay any costs to Ajax in exchange for contracting with Mazraoui, because he will become free in the event that he does not extend his contract, which will expire in June 2022.

She added that Mazraoui is shining greatly with Ajax this season, which makes it a tempting deal for Barcelona because he will be free at the end of next June.

It is worth noting that Mazraoui participated with Ajax Amsterdam in 10 matches of the current sports season since its inception, and succeeded in scoring 4 goals, and also contributed to making 3 assists.