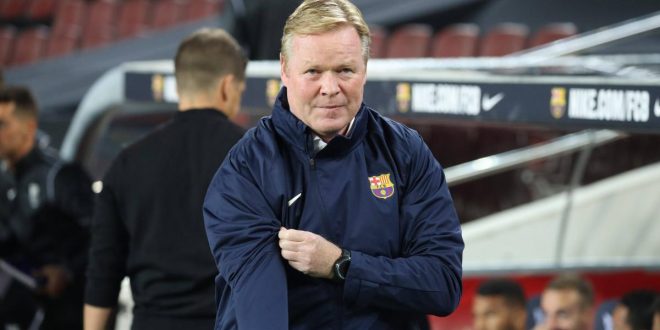 4 main reas0ns forcing Barcelona to back down in sackîng Koeman

Press reports mentioned the reasons that led to the change of the decision of Barcelona President, Joan Laporta, to dismiss Ronald Koeman and give him another opportunity to prove himself.

Koeman was on the cusp of leaving Barcelona during the current hiatus due to the recent poor results, but Laporta renewed his confidence in him last Saturday.

The Blaugrana did not achieve any victory during the past month, except by defeating Levante by three clean points at the Camp Nou, while drawing twice against Granada and Cadiz and losing to Bayern Munich, Benfica and Atletico Madrid.

But what is the reason behind Laporta’s sudden retreat from the dismissal of Koeman.

The absence of the alternative that Barcelona desires

According to Radio Catalunya, Laporta is a fan of the German school and would have liked to bring in Thomas Tuchel or Julian Nagelsmann, but failed to do so last summer.

She explained that the Catalan club president does not want to sack Koeman without ensuring that a strong coach is brought in to replace him, and since the nominated names such as Roberto Martinez, Ten Hag and even Xavi Hernandez are linked to contracts with other teams, it is difficult to find an alternative.

Cadena Cuban radio reported that Koeman’s dismissal means that Barcelona will pay 12 million euros in one go, which is the value of the penalty clause in his contract.

She also made it clear that the next coach will not receive a salary higher than 3 million euros due to the salary ceiling, which means that Barcelona will pay 15 million euros in a short period, which is a large amount for the Catalan club.

Laporta does not want to bring in a coach who will start with the team with complex confrontations that Barcelona will face next October.

As reported by “Radio Catalunya”, Barcelona will return from stopping to face Valencia at the “Mestalla” stadium, then Dynamo Kiev in the Champions League, and then El Clasico against Real Madrid in the “Camp Nou”.

Laporta believes that it is better for Koeman to continue during these matches than to prove his worth during this period.

The return of the injured

Barcelona will recover in October with the return of almost all the injured, as Ansu Fati is fully ready to start, as well as Jordi Alba, Ousmane Dembele, Sergio Aguero and Alejandro Balde will return to the starting team.

Pedri’s return will also take place during the coming period, and only Martin Braithwaite, who has been injured and absent from matches, will remain.

The Barcelona administration believes that with the return of the injured, Koeman will have more space to give everything he has, and the judgment against him will then become more fair.