After being asked about his regrets about joining Barcelona, Depay repاied: H0w do you ask me that .
أخبار عاجلة 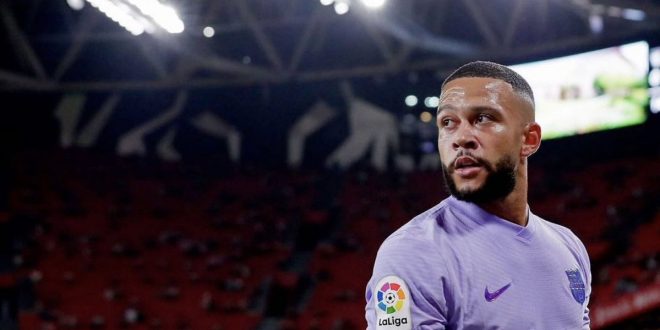 After being asked about his regrets about joining Barcelona, Depay repاied: H0w do you ask me that .

gool 6 أكتوبر، 2021 Uncategorized التعليقات على After being asked about his regrets about joining Barcelona, Depay repاied: H0w do you ask me that . مغلقة 81 زيارة

Since the arrival of Barcelona’s new arrival, Dutch Memphis Depay, who is suffering from the difficult conditions the club is going through, the Dutch striker responded whether he regretted his move to the Blaugrana Castle, given the crises that the Catalan team is experiencing at the present time.

Depay’s move to Barcelona coincided with the escalation of the economic crisis in the club, as the player joined Ronald Koeman’s team on a free transfer during the summer, before Lionel Messi’s departure to Paris Saint-Germain.

What did Debye say?

During an interview with “ESPN”, Memphis Depay was asked if he regretted joining Barcelona, ​​to reply: “How can you ask that? It’s Barcelona, ​​I don’t think you understand the size of this club and what it means for the player if you move to a club like this, you won’t I regret it more.”

Memphis continued: “Despite the results, I’m really happy at Barcelona, ​​it was a difficult time for the team, I don’t want to talk about it much, but people act as if the season is already over.”

Depay continued: “There are a lot of games to play, everything is still available.”

How are things inside Barcelona for the players?

The Dutch player confirmed: “Every player bears the responsibility, this is normal for a club like Barcelona.”

“We know the situation now, we know it’s difficult, playing with a lot of young players, a lot of injuries, but I think it’s only a matter of time,” he said.