The Manchester City sŧar, the "new Messi", and the disposal of two defense disasŧers and the outcast player .. اs it enough to lift Barcelona from the abyss
أخبار عاجلة 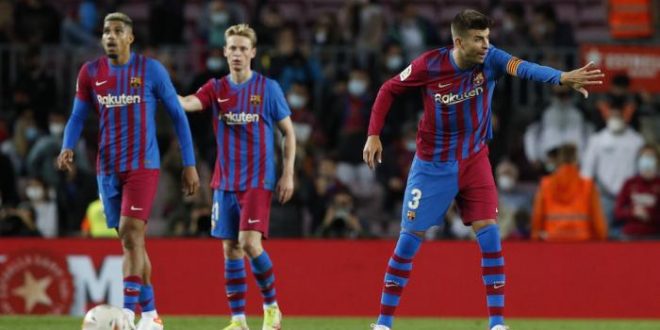 The Manchester City sŧar, the “new Messi”, and the disposal of two defense disasŧers and the outcast player .. اs it enough to lift Barcelona from the abyss

gool 8 أكتوبر، 2021 Uncategorized التعليقات على The Manchester City sŧar, the “new Messi”, and the disposal of two defense disasŧers and the outcast player .. اs it enough to lift Barcelona from the abyss مغلقة 135 زيارة

The curtain was brought down on the summer transfer market 2021, which witnessed a great revolution in Barcelona due to the huge financial crisis that the Joan Laporta administration tried to deal with in various ways.

Barcelona lost the services of its historical star Lionel Messi after the failure to renew his contract due to the economic situation, while he was forced to abandon a number of young players, whether on loan or sale to improve his budget.

In the last hours of Mercato, the Laporta administration took a new step by contracting Luc de Jong on loan from Seville, with Antoine Griezmann loaned to Atletico Madrid for two years.

Now, there is some economic space for the Barcelona administration to conclude deals in the winter Mercato, and indeed the newspapers have begun to talk about the future and what are Barca’s intentions in the coming period.

The Spanish newspaper “El Nacional” indicated that Pep Guardiola hopes to obtain the services of Frenchman Osman Dembele in exchange for allowing Sterling to leave his team.

The new Messi is knocking on the doors of Barcelona
Barcelona is close to acquiring the services of Turkish player Emre Demir from the Turkish club Kayserispor.

Demir is called “the new Messi”, and Barcelona has already agreed with the Turkish club to obtain his services for two million euros that he will continue in his team until next summer.

But the “Barcelona noticias” website indicated that Demir’s brilliance this season is prompting Barcelona to try to call the player to join the team next January, rather than waiting until the end of the season.

Milan moves to sign the outcast Barcelona winger
According to the Spanish newspaper, Mundo Deportivo, AC Milan is seeking the services of Alex Cuido, a young Barcelona winger, whose future seems ambiguous.

Cuido is not satisfied with his current situation at Barcelona, ​​sitting on the bench and not getting a chance to join the first team.

With his contract running until the summer of 2023, the Italian Milan will try to obtain the services of Koiado during the winter transfer window next January.

Barcelona is ready to let two of its defenders leave
The Spanish newspaper “Sport” confirmed that Barcelona is seeking in the near future to get rid of the French duo Samuel Umtiti and Clement Lenglet, and that the Catalan club is ready to listen to any offers made to the duo.

With the duo falling in the Barcelona defenders’ standings under the leadership of Ronald Koeman, their departure has become inevitable given the large salary they receive.