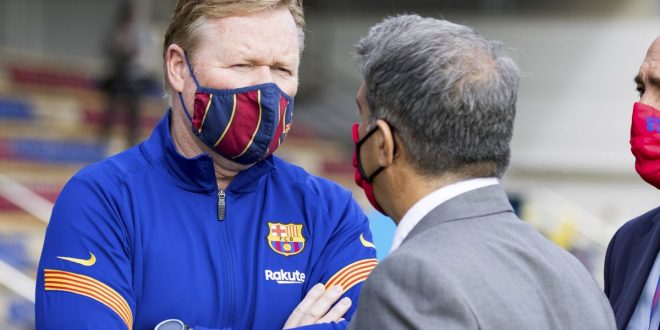 The Dutch coach publicly stated on more than one occasion last season that he needs more players who are physically strong. He considers it necessary to have another player with different characteristics for the midfield to complement the footballers like Pedri and De Jong.

It was no secret the name Koeman wanted: Georginio Wijnaldum. A very intense player in both areas, capable of providing passes but also capable of pressing and defending.

Barcelona came close to signing him this summer, but Paris Saint-Germain intervened at the last minute and took the player. The Dutchman, despite the important economic bet made by Paris Saint-Germain, has lost his prominent place in the French team in recent weeks.

Barcelona, ​​for their part, after not finally getting his signature has not included any midfielders. Even Alex Moreba ended up moving to RB Leipzig, a situation which led to footballers like Jaffe and Nico getting minutes with the first team.

However, Koeman still believes it is imperative that the midfielder arrives in January to give the squad more power. An important player in pressing and recovering balls.

Among the four options that Barcelona sports management is considering is Tottenham midfielder Tanguy Ndombele. The former Lyon player does not finish boosting the English squad, despite gaining prominence last season.

Signed for 60 million, he was already offered to Barcelona this summer. Because of his high price, his January arrival options will be through a loan. Another name indicated by the sports department in red is Inter player Marcelo Brozovic.

The Croatian is expiring his contract in June and would be a very affordable option. In a similar situation is Milan player, Frank Kessie, only 24 years old, who will be ending his contractual status next summer. They’re two options on the market, as their clubs would see with good eyes getting some cash in January rather than losing them for free in June.

Another player of different, more offensive qualities that Koeman knows well is the Manchester United midfielder, and his compatriot, Donny van de Beek, who still lacks plenty of opportunities in the England squad.