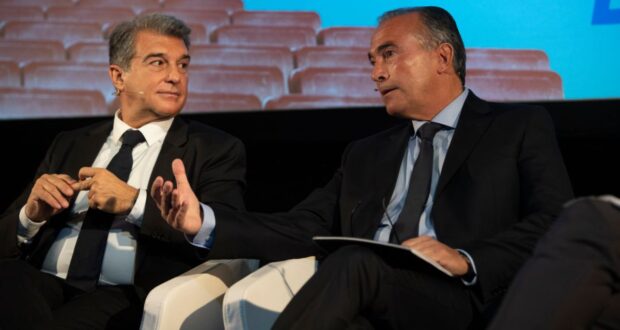 Given the difficult economic situation that the club is going through at the present time, Barcelona’s Deputy Sports Director Rafa Yusti hinted at the difficulty of contracting the young star, Erling Haaland, the Borussia Dortmund striker.

Haaland has attracted the attention of many big clubs in the world, thanks to the very distinguished level he has shown with Borussia Dortmund since his arrival at the Signal Iduna Park in January 2020, and many believe that he will compete for the title of best player in the world for many years to come.

Barcelona is one of the clubs that have been linked to the contract with Haaland, and although Rafa Yusti confirmed that the club aspires to sign him, but he also stressed the difficult financial situation that Barca is going through. Rafa Yusti: Barcelona will not repeat the mistakes of the past, Rafa Yusti told Mundo Deportivo newspaper when he was asked about the possibility of contracting Haaland, “We will see how the situation is next year and what we can allocate for contracts.

First you have to put up barriers inside the club we found in economic ruin, so let’s focus first on fortifying it, we have to feed the house first and then we will see what we can do.

Not forgetting that we always want the best players, and Haaland is one of the best in the world.” And the journalist asked him another question, which was whether it was correct to meet the exaggerated demands of Mino Raiola, Haaland’s agent, and he answered, “No, the president and CEO said it, in the previous period, which I repeat was disastrous, they bought the players without knowing if they were able to pay Or if what they did was an increase in debt, which caused salaries to rise dramatically.”