Xavi's body trembles during his presentation to the Barcelona fans, and indirectly explains the way he will follow in managing the team
أخبار عاجلة 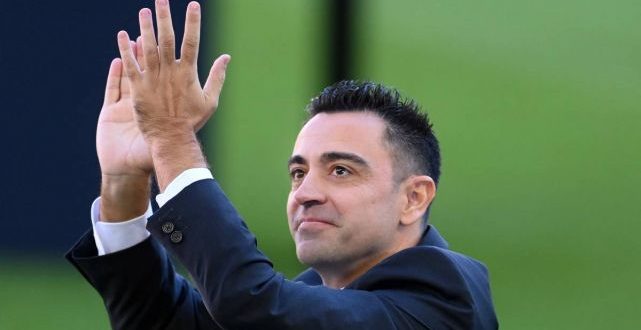 Xavi’s body trembles during his presentation to the Barcelona fans, and indirectly explains the way he will follow in managing the team

gool ‏4 أسابيع مضت Uncategorized التعليقات على Xavi’s body trembles during his presentation to the Barcelona fans, and indirectly explains the way he will follow in managing the team مغلقة 172 زيارة

Barcelona presented their new coach Xavi Hernandez in front of thousands of the sports club at the Nou Club stadium on Monday.

The 41-year-old Barcelona legend signed a contract that extends to 2024 on the field, accompanied by the club’s president, Juan Laporta.

Laporta said he had feelings for the fans during the presentation ceremony of the ex-midfielder who was accompanied by his family: It is a historic day for Barcelona. Welcome Xavi.

“Thank you all,” Xavi told the fans. I don’t want to get carried away by feelings but my body is shaking. It is the biggest club in the world and I will work hard to live up to the ambitions. Barcelona does not accept a draw or defeat. We have to win all the matches.

Barcelona had announced that it had reached an agreement with its football legend until 2024, to succeed Dutchman Ronald Koeman.

The Qatari Al Sadd agreed to leave travel during the season and allow him to train the Catalan team, which he played with for 17 years, after his rise from the junior sector.

And joined the coalitions Barcelona paid the value of the penalty clause in his contract with Al Sadd.

Chafee said: I am very ready and prepared. We have to be innovative in playing the ball, creating chances and striving hard. We have to regain the mission of a lot of things that the club has lost.

Xavi returns to Barcelona after six years of the club’s last contest in the competition.

Barcelona and its fans hope to play the role of a savior in the midst of a sports and administrative crisis for the club, which resulted in the departure of the historical scorer Messi and his move to Paris Saint-Germain this season.

Xavi played 767 games in the Barcelona shirt, the second most played player in the club’s history after Lionel Messi, and won 25 titles, most notably the Spanish League eight times and the Champions League four times.

He held the captaincy of Barcelona before concluding his four-year playing career with Al Sadd.

Barcelona sacked Koeman after a 1-0 defeat by Rayo Vallecano in La Liga and the previous result was the team’s fourth in six matches in all competitions.

Xavi refused the opportunity to coach Barcelona in January 2020 after the dismissal of Ernesto Valverde, but his name remained linked to a job even after Koeman was appointed to succeed Quique Setien in August of the year.