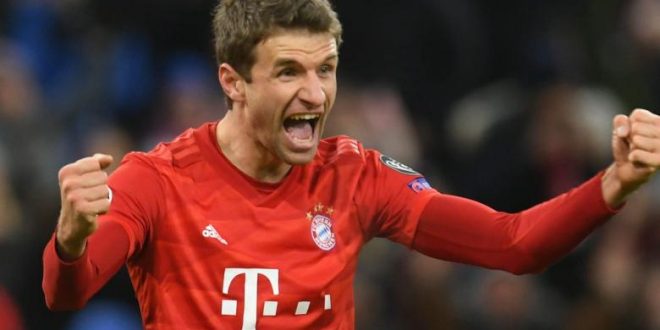 German international Thomas Muller angered Barcelona fans, not only by sending their team to the European League, but with his statements after the match.

Barcelona had been eliminated from the Champions League from the group stage, after receiving a heavy defeat from Bayern Munich 3-0, in the match that was held in the last round of this round from the same ears at the Allianz Arena.

Despite Barcelona’s good start and his threat to Manuel Neuer’s goal on more than one occasion, the difference in ability became evident over time until Thomas Muller scored the first goal in the 34th minute.

Muller’s goal was the 50th goal in the history of his participation in the European Champions League, equal to the giant Thierry Henry, while Barcelona was his favorite prey, considering that he scored 8 goals in 7 matches he played against the Catalans, to be also more than he scored against the Blaugrana.

While Xavi Hernandez’s battalion tried to return, Yuri Sani put the bullet of mercy with a powerful shot that missed goalkeeper Marc-Andre ter Stegen and scored in the 43rd minute and practically ended Barca’s chances of crossing to the Champions League final.

In the second half, Jamal Musiyala scored the third goal in the 62nd minute, amid a complete surrender from Barcelona, ​​​​who seemed to be convinced of the impossibility of returning in light of the tremendous superiority of coach Nagelsmann’s battalion.

After the match, Muller said in statements to the German “DAZN” network: “Barcelona cannot deal with our intensity, technically and tactically, they have everything, but at the high level of competition, they cannot match the intensity of the match.”

He continued, in other statements published by the official website of UEFA, about reaching the 50th goal in the Champions League: “I scored another exemplary goal, it is a good number, but I still have a lot to do in football.”