Laporta frankly confirms Mbappe for Real Madrid and the other star to Barcelona!
أخبار عاجلة 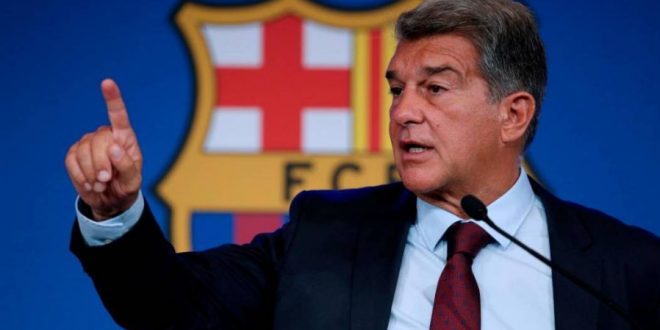 Laporta frankly confirms Mbappe for Real Madrid and the other star to Barcelona!

The Spanish Channel 4 reported that Barcelona club president Joan Laporta had contacted Mino Raiola to persuade him to join Erling Haaland to the Catalan club.

According to the Spanish Channel 4, Barcelona club president, Joan Laporta, told Raiola: “Mbappe will go to Real Madrid, and Haaland cannot go there.”

He added, “He should be the main leader of the Barcelona project to compete with Mbappe for the best in the world in the coming years.”

Real Madrid’s idea was always to sign Mbappe in the last transfer market, and then sign Haaland next summer, but Paris Saint-Germain’s refusal of the offers made for Mbappe will make Real Madrid try to sign the duo next summer.

And AS newspaper reported on its cover that Borussia Dortmund striker Haaland wants to live in Spain, and this is a gift to them.

One of the most talked about things in European football lately is the future of Norway’s fiery striker Erling Haaland. Everyone is talking about the Borussia Dortmund striker and speculating about his next move.

The Norwegian is expected to leave the German club next summer, with the activation of a clause in his contract that will allow him to leave if the penalty clause is met.

It is worth noting that Halland has been associated with Real Madrid and Manchester United since his appearance on the scene .. before many clubs joined at a later time, most notably Barcelona.