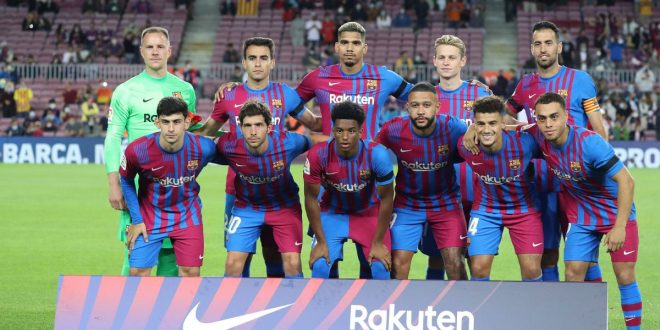 English press reports stated that some mediators had proposed a barter between Barcelona and Arsenal in the winter transfer market, in which Pierre Aubameyang would join the Camp Nou, in exchange for Ousmane Dembele’s departure to the Emirates Stadium.

Aubameyang does not have happy days with Arsenal, as he was stripped of the captaincy and excluded from several matches for disciplinary reasons, keeping his winter departure highly likely.

As for Dembele, his contract with Barcelona expires at the end of this season and so far he has not decided on whether to renew or not, which makes the option to dispense with him in January to reap some gains from his successor instead of leaving Barca for free next summer.

And, according to the newspaper “The Independent”, the idea of ​​exchanging Aubameyang and Dembele is now before the offices of the two clubs, but the only crisis is Barcelona itself, given that the 32-year-old’s salary is huge and the financial crisis and the Financial Fair Play Law are two stumbling blocks to the Gabonese’s arrival in Catalonia.

At the same time, it remains really unknown whether Ousmane Dembele would be interested in joining Arsenal, especially as the player is receiving the attention of other better clubs that ensure him a permanent Champions League presence.

Barcelona desperately needs to sign an explicit striker next January, after the announcement of Sergio Aguero’s retirement and the modest levels of Martin Braithwaite, in addition to the injuries of Ansu Fati and Memphis Depay, so there may be attempts to include Aubameyang despite all the obstacles currently in place.

It is worth noting that Dembele has been linked to joining Manchester United, Juventus and even Paris Saint-Germain in the coming period, in addition to what was raised about a special interest from Newcastle with the new huge sports project in St. James Park, in it.