Xavi announces it frankly.. the untouchable group in the team
أخبار عاجلة 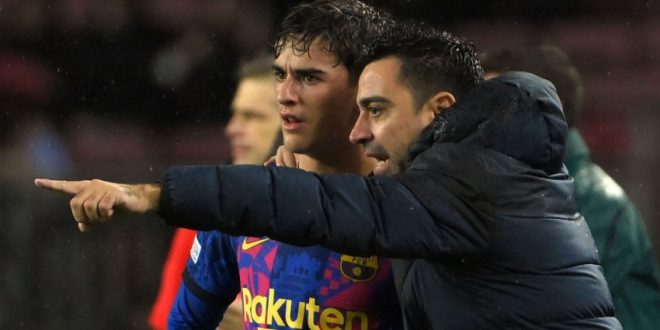 Xavi announces it frankly.. the untouchable group in the team

Barcelona coach, Xavi Hernandez, praised the 17-year-old star, Gavi, with a group of players, after their brilliance in Barcelona’s recent matches.

Javi scored his first goal with Barcelona in the Sevilla match, which the Catalan team won 3-2 and the young player was chosen as the best player in the match, after he presented an impressive display. The young man received a warm hug from his coach after the victory.

Xavi spoke about the importance of the young player and a host of other great young players at the Camp Nou currently, in a press conference ahead of Barcelona’s last game in 2021 against Sevilla.

Xavi said of gavi at the press conference: “He’s a great player, we can’t lose a player of this level. We cannot lose Gavi, Nico, Abdelsamad, Ansu, Pedri and Araujo, these players are the club’s present and future. Jaffe is definitely one of them. I understand, I know the club is doing really well to negotiate his contract. He is fundamental to this team.”

Barcelona are close to agreeing to extend gavi’s contract, transfers expert Fabrizio Romano reports. The new contract will run for five years and will see the midfielder’s salary increase each season.

The Seville match “another final” for Barcelona

Xavi moves Barcelona to Seville on Tuesday, December 21 for the final La Liga game of the year and a chance to move up to fourth in the table. However, it will be a tough test for the Andalusian team, who are currently flying high in second place in La Liga.

Barcelona are enjoying some momentum after beating Elche 3-2 in the final minutes, and Xavi told reporters that the match will be a final for the Catalan giants at the Estadio Ramon Sanchez Pizjuan.

“Tomorrow is another final for us so we will try to win the match. We know it will be difficult against Sevilla because they are in a good moment, they have a very good team and they have a very important coach and it will be very difficult for us. But we are very excited and excited to get the three points so that we can go into Christmas break and rest and come back stronger in January.”

Sevilla are heading into the match after their 2-1 win over defending champions Atlético Madrid, but have fears of injury to Lucas Ocampos, Gonzalo Montel and Diego Carlos before the match, Football Spain reports.

The Barcelona coach also gave his full support to goalkeeper Marc-Andre ter Stegen before the match. The goalkeeper is scheduled to play his 300th match with the Catalan team against Seville, but he has been criticized this season.

However, Xavi has made clear how important Ter Stegen is to Barcelona and how high he is with the 29-year-old Germany international.

“Mark is essential to the team. When I talked before about the commitment of the players, it was the same with Mark. His commitment, his professionalism, his dedication, he is exceptional, he wants to get better. There are moments when he made one-time mistakes, one-on-one mistakes, lately his game with the feet has been extraordinary. Can it improve performance? Yes, obviously, and he knows it. But distributing the ball, playing with his feet, he is excellent. Yes he has to get better, he knows it, it’s a question of how he plays, he knows it. For us he is one of the best players in the world and we must try to help him improve.”

Barcelona’s victory will see them outperform Atletico Madrid in the table and tie on points with Rayo Vallecano, who are flying high in fourth place. Xavi’s squad will return to action in 2022 against Real Mallorca on Sunday 2 January.