Emery to Pique: "Be honest and don't confuse people," and the latter reminds him of the remontada and says to him, "Get over it, Unai."
أخبار عاجلة 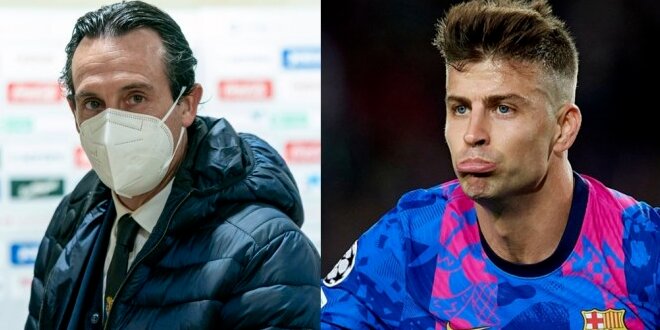 Emery to Pique: “Be honest and don’t confuse people,” and the latter reminds him of the remontada and says to him, “Get over it, Unai.”

gool ‏أسبوعين مضت barcelona التعليقات على Emery to Pique: “Be honest and don’t confuse people,” and the latter reminds him of the remontada and says to him, “Get over it, Unai.” مغلقة 84 زيارة

Barcelona defender Gerard Pique created a state of controversy after commenting on the events of the match between Real Madrid and Valencia at the top of the 20th round of the Spanish League.

Pique responded to Valencia’s comment on the social networking site “Twitter” that Real Madrid’s penalty was a theft.

But Pique’s comment angered the Villarreal coach, who decided to respond forcefully to the Barcelona defender’s statements, because a goal was not counted in favor of the “yellow submarines” in the Atletico Madrid match on Sunday evening.

Spanish coach Emery confirmed at the outset that the handball on Dani Parejo did not interfere with the course of the ball, and is not a reason for not calculating the goal.

The Villarreal coach took the opportunity to remember that weeks ago, neither the referee nor the video assistant referee saw a clear hand touch on Gerard Pique in favor of his team, and the result indicated a goalless draw, in a match that ended with the yellow team losing two goals without a response.

The 52-year-old coach criticized Pique strongly because he confirmed days after that match that the ball was not a penalty kick, and also criticized his comments on Twitter about the referee’s performance in the Real Madrid and Valencia match.

The Spanish coach said: “What happened with Pique recently was a handball and a penalty kick, it is clear that he touched the ball with his hand and we lost that match.”

And he continued, “It hurt me that he didn’t say that later, and then went on Twitter protesting the other matches.”

And he continued: “All you have to do is be honest and not confuse people. Instead of being silent, he said what he said to mislead people.”

What is Pique’s response?

On the other hand, Pique attacked him and responded strongly via his personal page on the micro-blogging site “Twitter”, saying: “There is a person speaking who was complaining after three years of the ruling when he lost 6-1, he overcame it, Unai.”

In his response, Pique deliberately reminded the Spanish coach of Barcelona’s match with Paris Saint-Germain in the second leg of the 16th round of the European Champions League in the 2016-17 season.

It is worth noting that Barcelona had lost to Paris Saint-Germain, and was coached by Unai Emery at the time, with a score of 4-0 in the first leg, but Barca managed to return and win at the “Camp Nou” 6-1, to advance the “Blaugrana” to the quarter-finals.