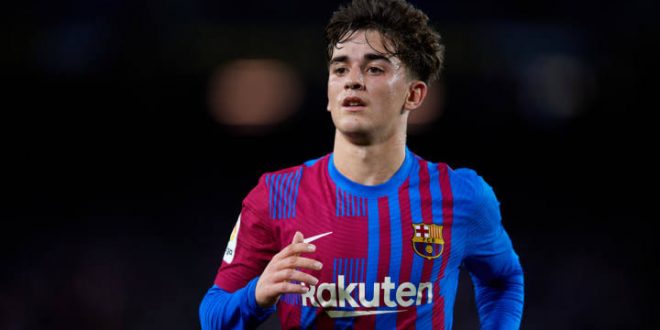 The promising young player, Gavi , the Barcelona midfielder, sent a new warning message to the Barca administration regarding the necessity of extending his contract for a long period, after his exceptional performance against Levante.

That Barcelona midfielder Gavi gave a new warning message to the Barca administration regarding the necessity of extending his contract for a long period, after his exceptional performance against Levante.

The 17-year-old’s contract with Barcelona will expire in the summer of 2023, so the management wants to extend his contract for a longer period.

The duo Pedri and Gavi entered the Barcelona stadium floor while Barca trailed in the score against Levante, to provide the duo with extraordinary levels that gave Barca the three points of the meeting.

On this matter, the Spanish newspaper “AS” said that the level, calmness and ingenuity of Jaffe in just half an hour was a warning message to the Barcelona administration about the necessity of extending his contract for a long time.

And the newspaper added that Barcelona had to resolve the issue of extending Gavi’s contract in light of the interest of the top English Premier League clubs, led by Liverpool, in addition to Bayern Munich.

The newspaper, quoting the Spanish network, “El Nacional”, said in a report that Liverpool was ready to pay the 42 million pounds, the value of the penalty clause in his contract, in order to bring him to Anfield.

And the newspaper, “El Nacional”, confirmed that Liverpool officials had informed those close to Jaffe that the Merseyside Red team was keen to include him in exchange for paying the penalty clause without negotiating with Barcelona if the financially strapped Catalan club could not make a suitable offer for him.
And the newspaper “AS” announced that Barcelona will not be able to neglect one of his greatest talents for several years, so it will be necessary to extend his contract, especially after Xavi’s talk that Barca cannot afford to lose Jaffe.

And the same newspaper pointed out that Barcelona will not give Gavi a salary like the one he currently receives in the highest category in the team because of his young age, but he will receive a gradual increase in salary if the player agrees to wear the Barca shirt for a long time.

This season, Jaffe participated with Barcelona in 39 matches in all competitions, scoring two goals and providing six assists.