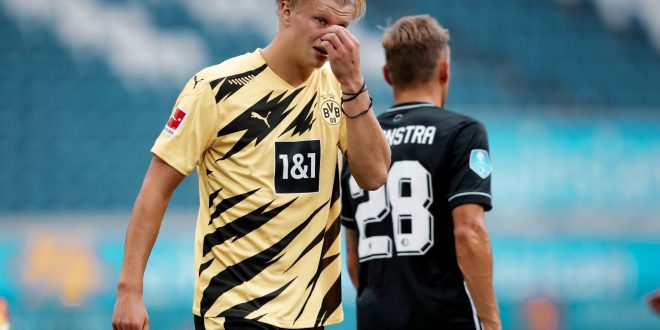 The 33-year-old’s future has been a major topic of discussion recently as he is entering the final year of his contract with the German champions. Die Roten insist that they do not wish to sell their ace striker, but he is believed to be keen on a summer departure.

Barcelona have been eyeing a move for Lewandowski for a while now. The Poland international has become the club’s preferred target after it became clear that a move for Erling Haaland could prove beyond their means.

The Catalan giants are understood to have held talks with the striker’s representative, Pini Zahavi, over a potential switch at the end of the season.

However, they are not alone in the race to sign Lewandowski, as Manchester United have also entered the picture to swoop the legendary goalscorer away from the Allianz Arena in the summer.

Sorry, the video player failed to load.(Error Code: 101102)
The Red Devils are in need of a new striker amid doubts surrounding Cristiano Ronaldo’s future. Edinson Cavani and Anthony Martial will, in all likelihood, leave the club permanently at the end of the season, whereas Marcus Rashford has also struggled.

So, the 20-time English champions are looking for a new prolific centre-forward. Haaland was on their radar as well, but the 21-year-old is uninterested in joining them due to their struggles on the field.

A move for Harry Kane has been mooted but the England captain looks set to stay put at Tottenham. Darwin Nunez is another player on the club’s shortlist, but Manchester United prefer signing Lewandowski.

The Premier League club have held talks with the 33-year-old’s agent as well, like Barcelona. However, both clubs are proceeding with caution as they do not want Bayern Munich to declare him as not for sale and keep him at the club until his contract runs out.

The report adds that Lewandowski would prefer a move to Spain at this stage of his career. However, any move would depend on how Bayern Munich react to his contract situation.