Even Pique intervened, Xavi must make a firm decision about what happened in the dressing room from the Barcelona player 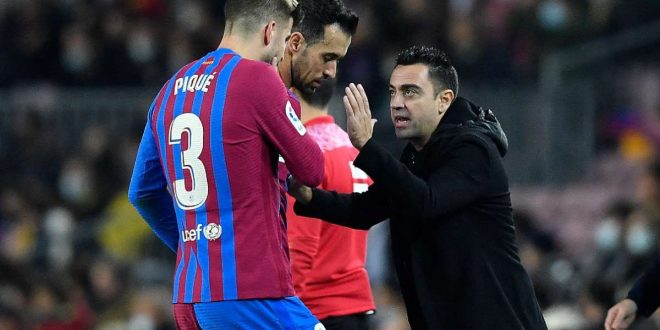 Even Pique intervened, Xavi must make a firm decision about what happened in the dressing room from the Barcelona player

gool barcelona التعليقات على Even Pique intervened, Xavi must make a firm decision about what happened in the dressing room from the Barcelona player مغلقة 181 زيارة

Barcelona now is a drama. The poor results have caused a very tense atmosphere in the locker room, especially since there are many players who know their future is in the air, and that they may be gone this season. There are footballers who are not happy with the few minutes available to them, and others who do not fully believe in the project at hand. Xavi Hernandez is now going through his worst moment since his arrival.

After a good series of results that caused illusion and hope to rise, they returned to the harsh reality in which they found themselves. Nothing is at stake anymore, there are many matches left to play, and the economic situation prevents them from getting excited about the possibility of big deals. The bad atmosphere in the club was reflected in the match against Rayo Vallecano, which was the third consecutive loss at home. But the real scandal did not appear on camera, and it is much more serious than many imagine. The person involved was Frenkie de Jong.

The Netherlands international is very angry after being substituted in the 60th minute, when the score was already zero to one against her, which ended up becoming decisive. He was performing very conservatively, which is why the Blaugrana coach decided to take him off the field. But this did not please the “21”, who left with a frown, threw off the shin guard and went straight to the locker room, without passing through the seat. That is if he comes back a few minutes later to see what happened on the field.

It was possible to watch it on television, and all the spectators who were at the Camp Nou. But he could not have thought of his “show” when the final whistle blew, because it had already happened on the way to the dressing room tunnel. The former Ajax player from Amsterdam and Willem II approached Xavi to ask for explanations, with a somewhat heated tone. And the person from Terrassa, who was also very angry about the defeat, did not want to talk to him.

According to witnesses who witnessed the scene, de Jong did not like to be ignored, and continued to insist that the 42-year-old coach give him reason to justify his change. Here many companions appeared.
Even Pique had to stop De Jong

Marc-Andre ter Stegen, Jordi Alba and even Gerard Pique had to take on the 1997-born midfielder, who had a massive furore. Fortunately, it did not go any further, but this could have serious consequences.

And more, considering the rumors that prompted De Jong to quit Barcelona in the next summer market.

There is serious talk of him reuniting with Eric ten Hag at Manchester United.