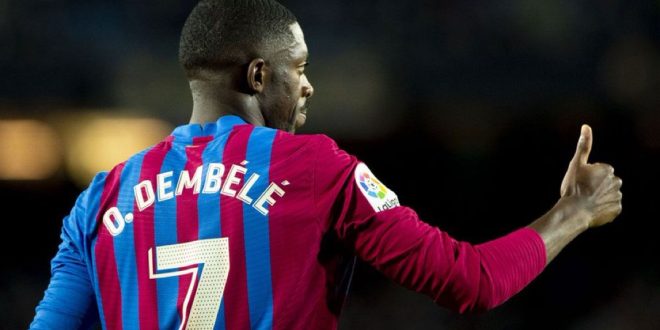 Spanish press sources revealed that Barcelona striker Osman Dembele’s negotiations with his club’s management regarding the renewal witnessed surprising developments regarding the position of the French striker.

And the media said that the talks between the agent of the French striker, “Osman Dembele”, the “Barcelona” striker, and the club’s management had become very positive. After the last meeting between the two parties yesterday, Wednesday.

The 24-year-old French player had imposed difficult financial conditions on the Barca administration in order to extend his contract, which expires at the end of the current season at Camp Nou, which has caused no financial agreement to be reached so far.

Sissoko, for his part, demanded high salaries amounting to 24 million euros per year, a figure that Barcelona cannot achieve in light of its economic crisis.

And according to what the Catalan newspaper “Sport” reported in a report, Dembele’s agent, Moussa Sissoko, met on Wednesday with the Barca administration, in a meeting that made the renewal very possible.

And the newspaper reported, that Dembele decided to reduce his financial demands on Barcelona, ​​but even the current demands are still greater than the offer made by Barca at the present time.

And the Spanish “Sport” confirmed, “Dembele is ready to receive a lower salary than what was offered to him from other clubs, in order to continue in the ranks of Barca, and therefore, Moussa Sissoko, Dembele’s agent, visited Barcelona recently to resume talks with Mathieu Alemani, the sporting director, after the session that brought them together in Marrakesh a few weeks ago.

The newspaper said that Barcelona, ​​for its part, promised Dembele and his agent to study the proposal he requested, as it was decided that a new meeting would take place in the coming days, by reaching an agreement that satisfies all parties through an improved offer.

And the newspaper reported, that the presence of Pierre-Emerick Aubameyang, greatly helped pressure Dembele to stay and reduce his financial demands. Because of the special relationship between them and the understanding on the field.”

In the end, negotiations between Dembele’s agent and Barcelona will continue and more sessions will be held in the near future to resolve the player’s contract extension file.

It is worth noting that Dembele contributed 13 goals with Barcelona this season in all competitions over 28 meetings, scoring 2 and making 11.