AS confirms the distinctive Catalan deal despite his club's denial, and Xavi agrees to forfeit De Jong 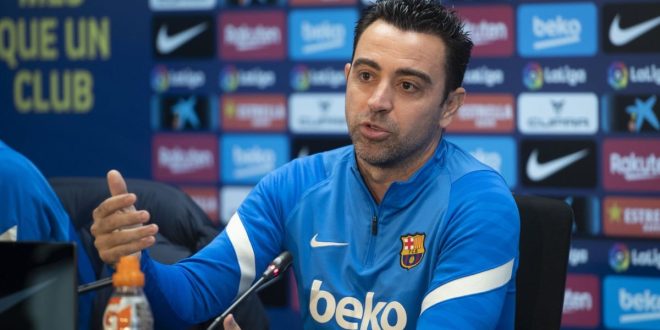 AS confirms the distinctive Catalan deal despite his club’s denial, and Xavi agrees to forfeit De Jong

In this context, the Spanish newspaper “AS” revealed that, as well as with the player, whose contract expires in 2023.

And the newspaper reported, that Laporta decided to sell Dutch player Frenkie de Jong in the next summer transfer season.

Despite Xavi’s public praise, Barcelona decided in recent weeks to offer the Dutch midfielder for sale, and Barcelona’s goal is to obtain a transfer of about 70 million euros, and Frenkie de Jong is mainly wanted by Manchester United and Bayern Munich, despite the presence of Other teams in the Premier League have also tested his status.

And the newspaper pointed out, that Xavi gave the green light to the financial director Matteo Alemani, in the process of selling the Dutch midfielder, the Barcelona football director greatly appreciates a player with a market value of 50 million euros, but Valencia CF is obligated to sell him this summer if he wants to get money from him. , because it was not renewed.

And the newspaper said, that Barcelona officials have already spoken with representatives of the 27-year-old Spanish player to try to stop the renewal of his contract with the bats in order for him to arrive free of charge in 2023.

Barcelona believes that the process will be good, and would like to sign a player who has a very competitive personality, and moreover he has a good relationship with the other members of the team (he was in the Olympics with Pedri and Eric Garcia among others)

Meanwhile Barcelona could get a positive difference of 40-50m if he is able to sell de Jong, a valuable player, but seen as lacking the drive to lead the new generation of Barcelona.

If the deal is completed, Xavi will have been able to close the list of untouchable midfielders Busquets and Pedri; And the minutes are shared by Jaffe, Soler, Casey and Nico.
The newspaper confirmed, that Soler’s operation is already underway and is much more advanced than many believe at this point, and we will have to see how it is resolved.

For the player, who has agreed with Barcelona on the terms of the contract, the main thing he wants is to get out of Valencia well, it is the club he carries in his heart after playing there his whole life and where his entire family lives.

But of course, after all these years he will know that he was in a stagnant project, he wants to grow and play in the Champions League and fight for titles, Soler is waiting for events, but Valencia and Barcelona have progressed well in his exit, and the key may be in Frenkie de Jong

It is reported that the Valencia administration, published a statement on the official accounts of the bat club, in which it “categorically” denied the agreement
The newspaper commented on this matter, saying, Mestalla, which has been accustomed to denying in recent months, confirms in its letter that its will is still to reach a renewal agreement with Carlos Soler.