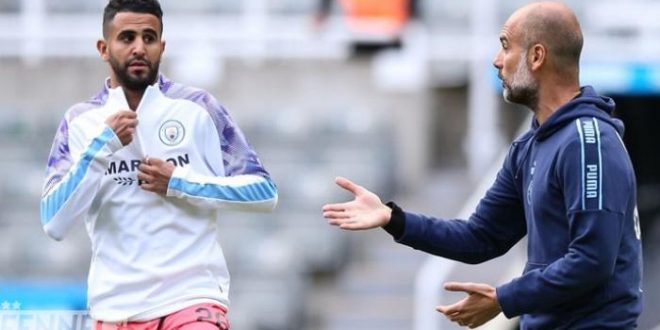 Mahrez and Griezmann in a possibاe exchange deaا between Barcelona and City!

Barcelona continues its efforts to get rid of its French striker Antoine Griezmann, and has entered into negotiations with Atletico Madrid during the past few days in order to conclude a reciprocal deal during which the Catalan club tried to bring in his compatriot Saul Niguez and 15 million euros in exchange for Griezmann.

Barcelona wants to get rid of Griezmann

The English press reported that the deal with Atletico failed, so Barcelona directed its link towards Manchester City and began negotiations with the English club to include one of the four players in its ranks in exchange for Griezmann, during the current summer transfer period.

And according to what was broadcast by the “Tot Costa” program on Catalonia Radio, and its details were quoted by the Spanish newspaper “AS” today, Wednesday, July 21, Barcelona wants to conclude a reciprocal deal with Manchester City, with whom it has friendly relations, by dispensing with Griezmann and including one of the players. The four in the heavenly team, most notably the Algerian Riyad Mahrez.

Barcelona is looking for free deals

Barcelona has so far signed the trio Sergio Aguero, Eric Garcia and Memphis Depay without paying anything, and was close to including Jorginho Wijnaldum in the same way, but the latter chose to move to Paris Saint-Germain.

Barcelona is racing against time to get rid of some of its players before the start of the new season, to reduce the value of the salaries paid by the club, in order to renew the contract of captain Lionel Messi, and to register the new deals that he concluded this summer.

This comes even though Mahrez confirmed in previous statements that he is continuing with the English Premier League champion and has no intention of leaving this summer, and the Catalan program indicated that Barcelona officials are aware of the difficulty of including Mahrez in particular, despite their clear interest in trying to attract him.

The “Tut Costa” program stressed that Manchester City’s first goal in the transfer market is to include an explicit striker, to support the offensive line next season, while Harry Kane comes at the top of the options, so it is possible that Barcelona will wait until Manchester City concludes the outright striker deal, because The deal will give Pep Guardiola the freedom to use one of the aforementioned quartet.

The program concluded that Joan Laporta, president of the Catalan club, wants to strengthen the ranks of Barcelona, ​​​​but at the same time without paying a lot of money, so he turned to free or exchange deals.