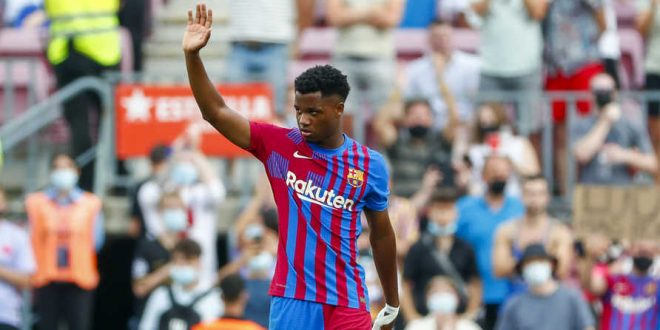 Real Madrid is playing a hidden role in the departure of young star Ansu Fati from the ranks of traditional rivals Barcelona in the coming period.

Barca is counting on Fati to be the star of the Catalan team in the coming years, and the player has already returned to participate with Barca in the matches and participated for some minutes against Levante and left a good impression by scoring his team’s third goal.

Paris finds Fati to be a replacement for Mbappe

Fati has a contract with Barcelona that expires next June, which means that the player will be free to negotiate with any club publicly, starting from next January.

Barcelona has the option to renew Ansu Fati’s contract for an additional two years without referring to the player, but Madrid press reports indicated that Paris Saint-Germain may attack him to obtain his signature.

The Spanish network, Defensa Central, reported that Paris may direct its compass towards the Camp Nou to include Fati to compensate for the departure of Frenchman Kylian Mbappe from the team’s mantle at the end of the season.

If the Mbappe and Real deal is completed, the wealthy of Paris will move to contract with Fati with an attractive financial offer at the end of the current season.