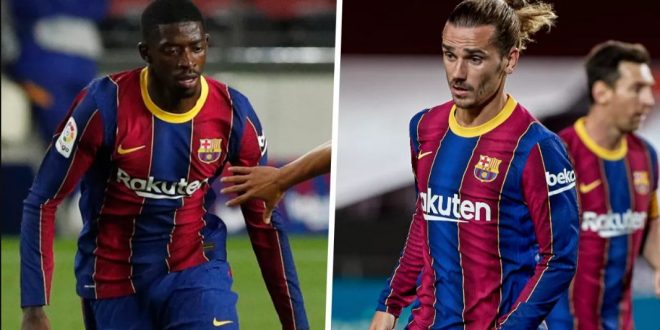 – The Japanese company announced that it will dispense with the Frenchman because of the racـist video with Dembele, and the company is also a partner of FC Barcelona and will ask for clarifications about what happened.

The controversiaا video of Griezmann and Dembele brought more reactions.

A few days ago, an unfortunate recording of both players surfaced in a hotel room in Japan, in 2019 and while on tour with Barcelona, ​​in which the duo made rac،ist comments to some Japanese workers who were helping them repair their Play Station.

The French striker had just struck a deal with the Japanese video game company to be its ambassador, a week ago, and the company was proud of being able to present Griezmann as a brand image, but within a few days, everything changed.

Now, the same company known to many as the creator of Pro Evolution Soccer, which was renamed eFootball PES a few years ago, has announced that it will reach out to Barcelona, ​​in turn, as a partner, to explain what happened.

The goals scored by Barcelona’s first-team players are celebrated through game-generated animations, something that could change if the company eventually also decides to sever its association with the club.

These were the company’s words: “Konami Corporation believes, as is its sporting philosophy, that discrimination of any kind is unacceptable. Previously, we announced Antoine Griezmann as Yu-Gi-Oh! However, in light of recent events, we have decided to cancel the contract. In connection with the eFootball PES franchise, we will ask FC Barcelona, ​​as a club and partner, to explain the details of this case and their future actions.”

Both Griezmann and Dembele have already apologised, but as evidenced by the unilateral termination of Griezmann’s contract, that wasn’t enough.

At the same time, Rakuten has already requested clarifications from FC Barcelona, ​​and as reported by Rac1, Griezmann contacted them and asked them to pardon.