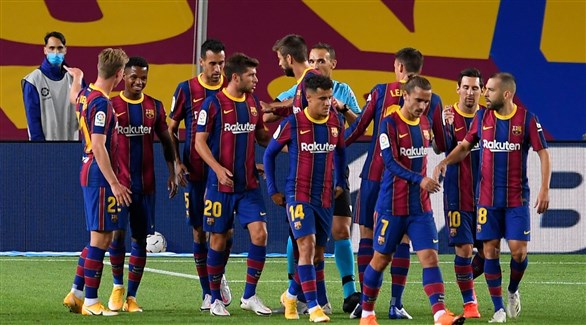 The Barcelona administration continues to work hard to reduce the salary bill and conduct a deep “cleaning” of the dressing room, and Umtiti, Pjanic and Braithwaite may be the next to leave.

Barcelona needs to lighten its salary block, not only to be able to score Leo Messi and the four signings he’s made this summer (Eric Garcia, Aguero, Depay and Emerson), but also to start resolving his delicate economic situation.

The Bartomeu administration and the Corona virus have put FC Barcelona between a rock and a hard place, and Joan Laporta is forced to take many decisions, some of them radical to “save” the entity’s short-term future, but also to reduce debt and prevent the financial crisis from continuing for a longer period.

In the past two weeks, the Barcelona president has accelerated “exit operations”, and Barcelona has formalized a total of seven exits, which were added to the victim announced with Juan Miranda at the beginning of June.

At the beginning of July, the sports department loaned Francisco Trincao to Wolverhampton (with a future purchase potential of 29 million) and sold Junior Firpo to Leeds for 15 million. For him about five million.

In total, Barcelona received 35 million euros and, most importantly, provided seven salaries. Although the records of players who left Camp Nou were not excessively high, everything helps.

In addition, some of the victims mentioned above – particularly those of Matthews – have served Laporta to “sound” a message to the dressing room. If a player does not enter the club’s plans, they will work tirelessly to transfer them, loan him, or terminate their contracts. The club cannot pay the player a salary. Play. Especially with what is being paid with some cases such as Miralem Pjanic and Samuel Umtiti.

In fact, the Technical Secretariat is already offered the Freedom card on Umtiti, but the footballer refused it. He knows that no team, he will be able to offer a salary close to what he currently receives even if his transfer is free, And Pjanic has some suitors, but he will also have to Accepting his salary reduction, two files that were urgently resolved in the Camp Nou offices.

At the same time, Barcelona is working to transfer players who have a market, and in the next few hours it will be an official farewell to Moncho to embark on an adventure in the first division in the Granada shirt. For his part, Martin Braithwaite has been re-evaluated in the Euro thanks to his great role with Denmark, and Antoine Griezmann has more And more numbers to leave Barcelona.

In the case of Griezmann, there is no need to rush: the club understands that offers will come, and prioritizes reaching good agreements that provide the club with the possibility of strengthening the team, the French is a piece subject to some exchanges, but it cannot be ruled out their continuation as well, of course, the transfer market looks long and intense.

Practically the paralyzed operations are the cases of Philippe Coutinho and Osman Dembele, the two most expensive signings in the history of Barcelona. They were injured and it will be difficult to find a way out for them. The sports administration wants to renew the contract of the French player, who has one year left on his contract, to prevent him from leaving with the freedom card next summer, and if Not reaching an agreement with his agent, he will apply pressure measures until the winger agrees to leave now.

With Elijas Moreba and Alejandro Balde, Barcelona have already shown they will not be lenient and have been left out of the first team until their contracts are renewed.