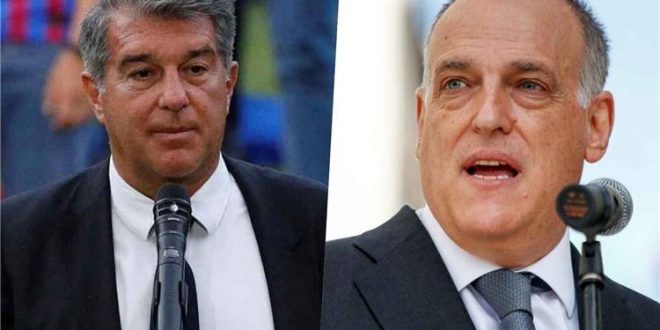 Javier Tebas, president of the Spanish League, published a tweet through his official account on the social networking site “Twitter”, in which he mocked Joan Laporta, president of Barcelona, ​​​​and made a veiled assertion that he is not the one who runs the “Blaugrana”.

And a violent crisis recently erupted between Real Madrid and Barcelona on the one hand, and the Spanish League on the other, due to the CVC investment fund’s offer to acquire 10% of the league’s income for 50 years in exchange for 2.6 billion euros to be obtained by the clubs.

Real Madrid and Barcelona are leading the opposition to this offer, as they see that it does not meet the demands of the clubs, to the extent that the Royal Club headed by Florentino Perez is planning to file a criminal complaint against Tebas and Javier Jaime, head of the investment fund for fraud.

What did Tebas say to ridicule Laporta?
Tebas mocked Laporta, commenting on the news that the CEO of FC Barcelona had threatened the president of the “Blaugrana” to resign if he accepted the CVC offer.

And that there is a relationship between the CEO and Florentino Perez, which led to the rejection of the CVC offer, which ultimately led to the failure to sign a new contract with Barcelona legend Lionel Messi.

Tebas indicates implicitly during his response that Perez runs Barcelona, ​​not Laporta, and that the Real Madrid president is trying to destroy the Catalan club.

“To be clear, this is the beginning, who is responsible for managing Barcelona,” Tebas said through his official account on the social networking site “Twitter”.

He added: “Without Messi, without 270 million euros, a perfect plan.”