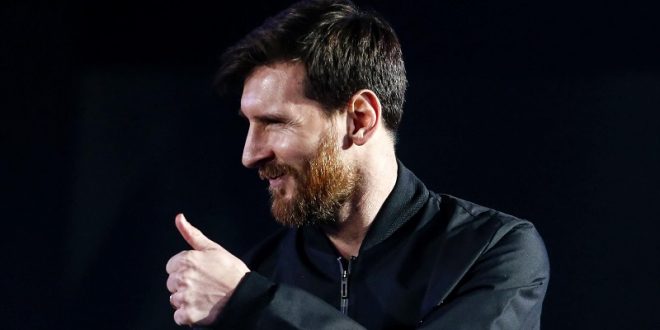 Argentine star Lionel Messi surprised a 100-year-old man from his country, who has been writing all his goals in a notebook since the beginning of his career in 2004.

On the occasion of his 100th birthday, the Barcelona legend sent a video of this man named (Don Hernan) as an unexpected birthday gift, in which he expressed his admiration for the distinguished follow-up by this man, of his matches and numbers, continuously.

In the video posted by this man’s grandson, Messi said: “I’ve heard your story, it’s incredible that you jot down all my goals in a notebook. I want to give you a big hug. And thank you for the work you’re doing. I wish you the best. See you soon.”

For his part, Hernan told his grandson when he heard Messi addressing him in the video: “Don’t tell me it’s Messi.” The young man replied, “It’s Messi, and he salutes you.” Then Hernan asked, “And where is he? Here at home?” The grandson replied, “No, he is at his home in Barcelona.”

The young man, named Julian Mastrangelo, explained the reason for his grandfather’s approach, adding: “He is not good at using technology. He has no phone, no internet, no computer. He writes down every goal of Messi in a notebook. He keeps track of all his matches. Because he still can.”

Hernan is 100 years old, and every time Messi scores a goal, he writes it down in his notebook.

Messi found out about this, and after winning the Copa America, he sent Hernan a video greeting him. The family's reaction to the video 🥺 (via julian.mc98/IG) pic.twitter.com/9apydpyqEP